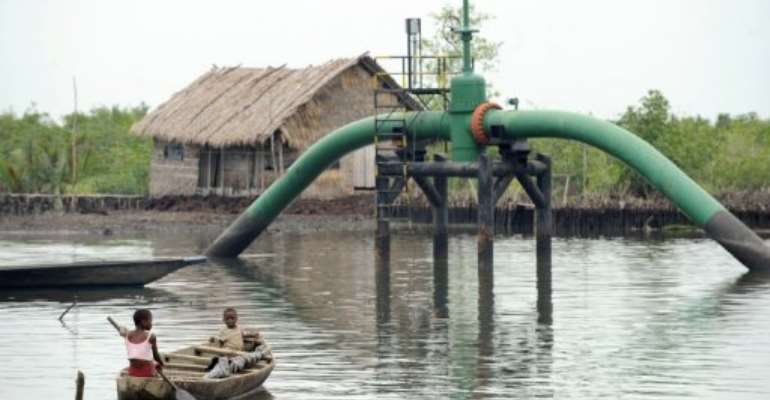 Children sail past an oil pipeline near their home at Andoni settlement, Bonny waterways. By Pius Utomi Ekpei (AFP/File)

Ian Craig, Africa's vice president for the Anglo-Dutch giant Shell Exploration and Production, said that while militant attacks on oil installations in the southern Niger Delta region have slowed, oil theft has surged.

"The greatest challenge ... is the massive organised oil theft business and the criminality and corruption which it fosters," Craig told an annual oil conference of industry players and government.

The stolen oil fuels a lucrative black market in Nigeria, Africa's top oil exporter, as well as in neighbouring countries.

"The volume of oil which is stolen is difficult to estimate but is probably in the region of 150,000" barrels per day, Craig said.

Bunkering, as oil theft is commonly referred to in Nigeria, involves siphoning crude from pipelines into makeshift vessels.

At their peak, attacks on oil installations by militants claiming to be fighting for a share of the oil wealth for locals slashed Nigeria's production by about a million barrels a day.

A 2009 government amnesty for the militants largely ended the violence and saw output rebound to levels not seen in years.

"We have been able to bring production back, but it is still below pre-militancy levels," Craig said.

Oil Minister Diezani Alison-Madueke was upbeat, saying production levels of oil and its condensates could rise to 2.68 million barrels in the coming weeks.

"The oil and gas sector has witnessed a renewed wave of activities ... which has placed the industry on a path of growth," he said.

Production stood at 2.18 million barrels per day in January, according to the International Energy Agency.

The oil and gas industry accounts for around two-thirds of government revenue and more than 90 percent of export earnings in Nigeria.

Craig said Nigeria has the potential to become a major global energy supplier in the face of rising energy demands, "but it needs action now" to achieve the goal.

New investment in the sector has been hindered because a state oil firm -- which operates joint ventures with the major oil giants -- is under-funded, and a vital oil industry regulatory law has yet to be enacted.

The petroleum industry bill, expected to turn around the fortunes of the country's five-decades-old industry, has been before the country's parliament since 2009.

Efforts to clean up the corruption-ridden sector saw the government of President Goodluck Jonathan scrap subsidies on locally consumed fuel in January.

The move more than doubled pump prices in a country where nearly two-thirds of the population of 160 million survive on less a dollar a day. Nationwide strikes and protests forced the government to partially abolish the subsidies.