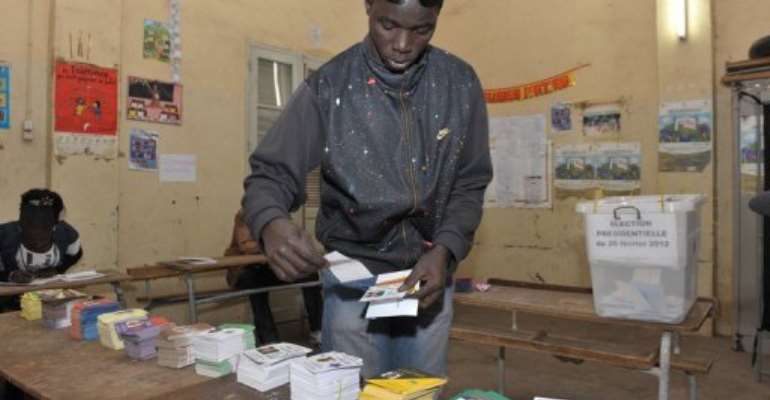 A member of the armed forces casts his ballot in Dakar ahead of presidential polls. By Seyllou (AFP/File)

DAKAR (AFP) - Africa's top envoy was expected in Senegal Tuesday ahead of tense weekend polls, with the opposition hoping he can talk 85-year-old President Abdoulaye Wade out of seeking a third term.

Wade's camp said Olusegun Obasanjo was welcome to observe the February 26 election but made it clear there was nothing to mediate for the former Nigerian president.

Obasanjo's visit coincides with yet another protest call by the opposition in the heart of the capital, where days of street clashes have played out between demonstrators and police trying to enforce a ban on gatherings.

The Nigerian statesman travels to Senegal as the head of a joint mission between the African Union (AU) and the Economic Community of West African States (ECOWAS).

An ECOWAS statement said Obasanjo's mission was "to engage all the political stakeholders in Senegal with a view to promoting dialogue and ensuring peaceful, fair and transparent elections."

The country's opposition has expressed hopes that Obasanjo, who also heads the AU observer mission, will convince Wade to abandon the race.

"It would be poetic justice," said prominent anti-Wade campaigner Alioune Tine, recalling that Obasanjo had been thwarted from changing the constitution to accomodate his own ambitions for a third term in 2007 elections under pressure from African peers, including Wade.

Despite having served two terms in office, a limit he himself introduced, Wade says later changes to the constitution allow him to serve two more mandates.

Presidential spokesman Serigne Mbacke Ndiaye said Obasanjo would be welcomed with open arms but "as of now no mediation is expected."

"If he takes advantage to talk to someone or the other we are open to that, but we remain firm on certain principles" such as the election taking place on Sunday, he said.

Riot police took up position at Independence Square as the opposition said they would again defy a ban on gathering in the downtown suburb of Plateau which led to five days of street clashes last week.

Police clashed with rock-throwing youths in riots around the seaside city as they tried to stamp out protests with tear gas, rubber bullets and water cannon.

On Monday despite calls to protest few turned out and police calmly sent them away without the violence seen in preceding days.

Interior Minister Ousmane Ngom reiterated in a statement that the ban was in place "to preserve a sensitive area which houses several state institutions, diplomatic representatives, banks and hospitals."

He said alternative areas such as Obelisk Square, where the opposition held earlier protests, were available to candidates wishing to hold rallies.

Wade's spokesman called for "peace and serenity" assuring that all measures had been taken for the holding of a peaceful, democratic and transparent election.

He said nearly 3,000 observers from 101 organisations were accredited. The AU is sending a team of 90 people and ECOWAS 150.

Senegal, one of Africa's most stable democracies, is facing its most tumultuous polls since independence.

Wade has brushed off opposition concerns as "temper tantrums" and derided criticism from France and the United States, which have both urged him to retire.

He will face 13 opposition contenders, including three former prime ministers, in Sunday's election.