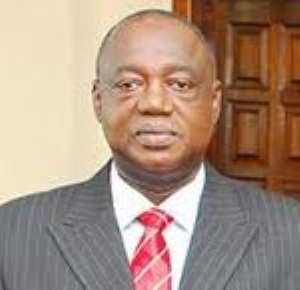 Mr. O.B Amoah
Information gathered by The Chronicle on events leading to the arrest of Mr. Osei Bonsu Amoah, Member of Parliament (MP) for the Nsawam-Aburi constituency in the Eastern Region, indicate that the police and the Attorney General's (A-G) office pulled a fast one on Parliament to effect his arrest.

The Chronicle gathered that the Criminal Investigation Department (CID) of the Police Service, last week put in a request to the Speaker of Parliament to allow O.B Amoah answer questions at the CID office, but before the leadership of the House could sit to discuss the matter, the Attorney General and Minister of Justice intervened to withdraw the request, which was a ploy to take the Honorable Member unawares.

The A-G's later intervention, and subsequent withdrawal of the request, came with an explanation that Parliament would be informed in due course, when it was ready to invite the Honorable member, only for the police to lay siege and arrest the former Deputy Minister of Education and Sports.

O.B. Amoah, however, was returning from a parliamentary duty at the La Palm Hotel to his house, when he was picked up by armed police personnel.

But the Minority Leader in Parliament, Osei-Kyei Mensah-Bonsu, told The Chronicle that the action of the police constituted an affront to the rule of law, and a breach of provisions in the country's Constitution.

He made reference to Article 117 of the 1992 Constitution, which states: 'Civil or criminal process coming from any court or place out of Parliament shall not be served on, or executed in relation to the Speaker or member, or the Clerk to Parliament while he is on his way to, attending at, or returning from, any proceedings of Parliament'.

He noted that for the police to lay siege and arrest the Member of Parliament was against the laid down procedures and stated provision in the Constitution, and affects the very integrity of Parliament as an institution.

He also did not rule out the fact that the intervention by the A-G in the matter might only be a strategic move employed to arrest the Member of Parliament. The Minority Leader also hinted that the Minority in Parliament would soon make a statement on the issue.

Thaddeus Sory, counsel for O.B. Amoah, also challenged the manner in which his client was arrested, stating that a letter had earlier been sent to the police, indicating their preparedness to cooperate, regarding investigations in the Woyome scandal.

It would be recalled that the lawyers of Betty Mould Iddrisu, in like manner, wrote to the Ghana Police Service, indicating the former Education Minister's preparedness to voluntarily appear before the police, concerning the Alfred Woyome saga.

The Communications Director of the NPP, Nana Akomea, insists that the National Democratic Congress (NDC) was bent of roping in members of the NPP into the Woyome issue, which has since become an albatross around the neck of the Mills administration.

His arrest, in the opinion of other leading members of the NPP, was only a diversionary tactic by the National Democratic Congress to take attention off the successful rally organised by the party over the weekend.

Meanwhile O.B. Amoah has been released on a GH¢20 million bail with two sureties.

Have Confidence In Me, I'm An Honest Leader — Akufo-Addo
8 minutes ago