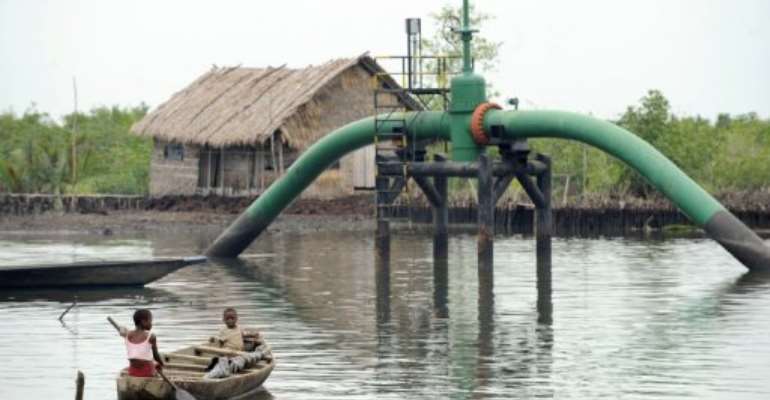 Children sail past an oil pipeline near their home at Andoni settlement, Bonny waterways. By Pius Utomi Ekpei (AFP/File)

ABUJA (AFP) - Oil companies in Nigeria are battling against a rising theft that is costing them an estimated 150,000 barrels of crude each day, an oil major official said on Tuesday.

Ian Craig, vice president for Shell Exploration and Production Africa said militant attacks on oil installations in the southern Niger Delta region had slowed down, but oil theft has surged.

"The greatest challenge ... is the massive organised oil theft business and the criminality and corruption which it fosters," Craig told an annual oil conference of industry players and government.

The stolen oil fuels a lucrative black market across Africa's top oil exporter and its neighbours.

"The volume of oil which is stolen is difficult to estimate but is probably in the region of 150,000" barrels, said Craig.

Attacks on oil installations by militants claiming to be fighting for a share of the oil wealth for locals had, at their peak, slashed Nigeria's production by about a million barrels a day.

A 2009 government amnesty for the militants ended the violence and saw output rebound to levels not seen in years.

"We have been able to bring production back but it is still below pre-militancy levels," said Craig.

Production stood at 2.18 million barrels per day in January, according to the International Energy Agency.

The oil-and-gas industry accounts for around two-thirds of government revenue and more than 90 percent of export earnings in Nigeria.