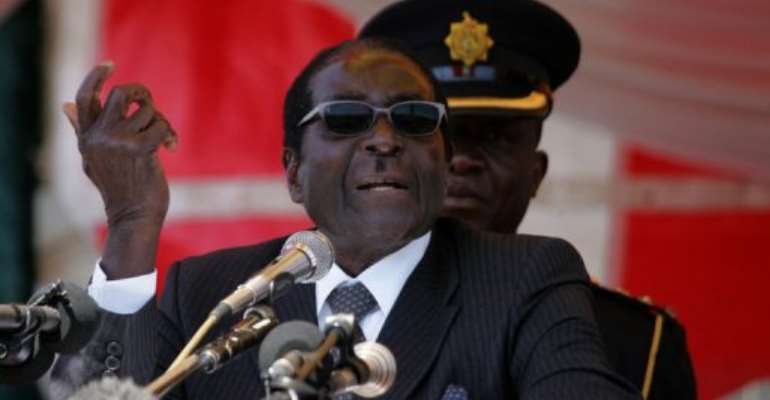 Robert Mugabe was chosen in December by his ZANU-PF party to stand again as its presidential candidate. By Jekesai Njikizana (AFP)

"The day will come when I will become sick," Mugabe said in an interview on state-owned Radio Zimbabwe, dismissing fears about his health.

He poked fun at reports that suffers from a life-threatening disease.

Mugabe, in power since independence in 1980, said he will stand again in new elections that he insisted should be held this year -- with or without the new constitution required under Zimbabwe's power-sharing deal with Prime Minister Morgan Tsvangirai.

"I came from the people and the people, in their wisdom, our members of the party, will certainly select someone once I say I am now retiring, but not yet. At this age I can still go some distance, can't I?"

Mugabe was chosen in December by his ZANU-PF party to stand again as its presidential candidate.

"There is no one who can stand and win at the moment," he said of the contenders in his party jostling to succeed him.

"We just must have elections. They just must take place with or without a new constitution. If others don't want to have an election then they are free not to participate," he told state television.

"Nobody is forced to go to an election but definitely I will exercise my presidential powers in accordance with the main principal law, the constitution of our country, and announce when the election will take place."

Mugabe's health has been the subject of much speculation, especially since WikiLeaks last year released a 2008 US diplomatic cable saying central bank chief Gideon Gono had told then-US ambassador James McGee that Mugabe had prostate cancer and had been advised by doctors he had less than five years to live.

Last year he visited Singapore several times, with his spokesman saying the president had gone for cataract surgery amid repeated media reports that he was suffering from cancer.

Mugabe's health has been cited as one reason that a faction of his ZANU-PF party has pushed to rush new elections.

He turned 88 on Tuesday and a birthday rally will be held at a stadium in the eastern border city of Mutare on Saturday.

The celebrations will include a football match by major league teams and a concert featuring the country's top musicians.

Mugabe formed a power-sharing government with Tsvangirai in 2009 to mend an inflation-ravaged economy and avoid a political melt-down after a bloody presidential run-off election.

The two rivals agreed to a raft of reforms including amending electoral and media laws and drafting a new constitution to pave the way to fresh polls.

But work on the new charter has progressed in fits and starts, hindered by attacks on public outreach meetings by supporters of Mugabe's ZANU-PF party.

Mugabe has repeatedly pressed for elections this year, but the constitution-drafting commission says a referendum on the charter could not be held before August, meaning elections under the new constitution would not likely be possible until next year.