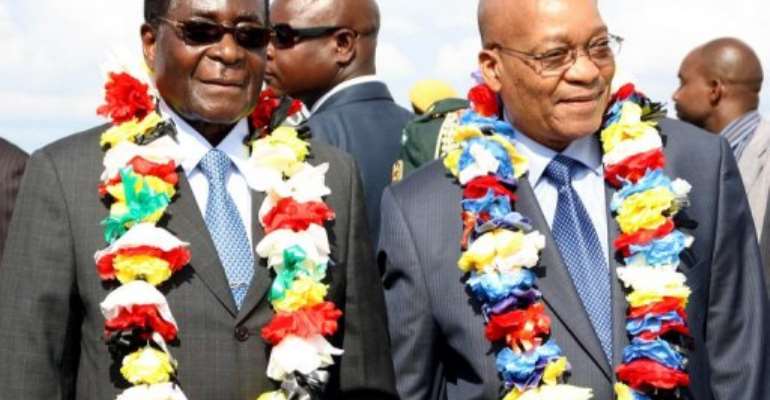 Mediators from the 15-nation Southern African Development Community (SADC) brokered the power-sharing deal between Mugabe and rival Morgan Tsvangirai in 2008, and have appointed Zuma to oversee implementation of the pact.

But Zuma's facilitation team has riled Mugabe's ZANU-PF party by pushing for faster implementation of reforms agreed to in the deal.

"We can reject Zuma in broad daylight. We have already told him that," he said in excerpts from an interview to be aired by state-run Radio Zimbabwe ahead of his 88th birthday on Tuesday.

He also took a swipe at Zuma's international relations adviser Lindiwe Zulu, a key member of the facilitation team, saying she was not authorised to act on Zuma's behalf.

"This woman Lindiwe Zulu thinks it's South Africa" that is the mediator, he said. "It's not South Africa but President Zuma and Zuma alone."

Last year ZANU-PF attacked Zulu after she warned Zimbabwe risked sliding into chaos if Mugabe died because he had no clear successor in place.

The party, which analysts say risks fracturing if the ageing president dies, called the statements "reckless and inflammatory".

Mugabe and Tsvangirai formed the power-sharing government in 2009 to mend an inflation-ravaged economy and stem political violence after a bloody presidential run-off election.

The rivals agreed to a raft of reforms including amending electoral and media laws and drafting a new constitution to pave the way to fresh polls.

But work on the constitution has run in fits and starts, hindered by attacks on meetings by ZANU-PF supporters.