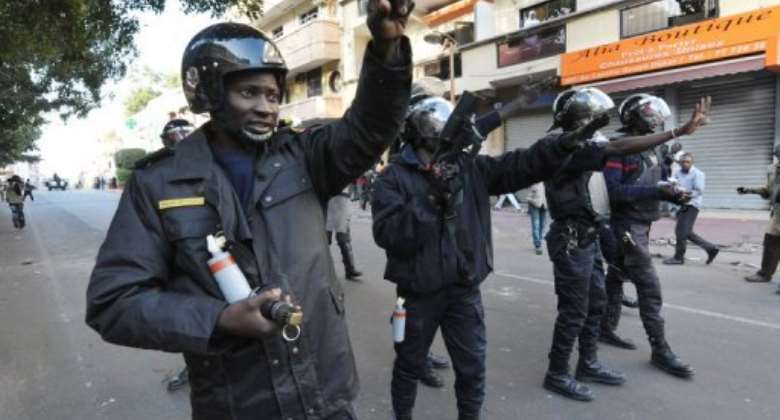 DAKAR (AFP) - Dakar braced Saturday for more protests just days before presidential polls in which President Abdoulaye Wade is seeking a highly disputed third term which has upset one of Africa's most stable nations.

Some 23,000 soldiers and paramilitary police were to begin voting Saturday as the western African nation is gripped by tension after days of opposition protests against the 85-year-old Wade that have been stamped out by police.

The opposition June 23 Movement (M23) said it would again defy a ban on protests and attempt to rally at Independence Square in the heart of the capital at 3pm (1500GMT) ahead of the February 26 polls.

Scores of riot police manned positions in the downtown Plateau district where hours of running battles between security forces and protesters played out on Friday afternoon, leading shopowners to barricade their store-fronts.

The seaside capital was left strewn with debris after protesters erected flaming barricades at street intersections, burning tyres, cardboard and wooden tables used by market women to sell their wares.

"We reiterate the peaceful nature of M23, but as long as the protests are banned, clashes can be expected," said movement spokesman Abdoul Aziz Diop.

Anger flared on Friday as police threw three teargas grenades into a mosque belonging to the nation's largest Islamic brotherhood, the Tidianes.

Later that evening violence erupted in the brotherhood's capital, the western city of Tivaouane, where the mayor's office was burned down and protesters set up burning barricades, the APS news agency reported on Saturday.

"Everything was destroyed, burned. ... Nothing was saved except the registry office because some youths used themselves as shields to preserve this municipal service," deputy mayor El-Hadj Malick Diop told APS.

He said those responsible were "youths, surely manipulated by politicians who are losing ground."

Diop, a member of President Abdoulaye Wade's ruling party, said opposition youths had tried to vandalise his home, but were stopped by neighbours who had stepped in.

Senegal is a 95 percent Muslim nation whose citizens follow one of four Sufi brotherhoods including the Tidiane. The west African nation is known for its religious tolerance.

The protests, which have set the nation on edge over the past month and prompted international concern for one of the continent's pioneer democracies, are aimed at Wade, Africa's second oldest leader after Zimbabwe's Robert Mugabe.

Wade's opponents argue he may even be older, due to poor record keeping and delays in seeking birth certificates common at the time of his birth.

Despite having served two terms in office, a limit he introduced, Wade says additional changes to the constitution in 2008 mean he can serve two more mandates and wants more time to finish his "Grand Projects".

The country's highest legal body approved his candidacy on January 27, which caused a week of riots in the capital and elsewhere that left four people dead.

Since the official election campaign kicked off Wade has swept energetically through the country promising universities, roads, airports and massive agricultural projects to win over some five million registered voters.

The 13 opposition contenders, which include three of Wade's former prime ministers, failed to find a consensus candidate before the campaign.