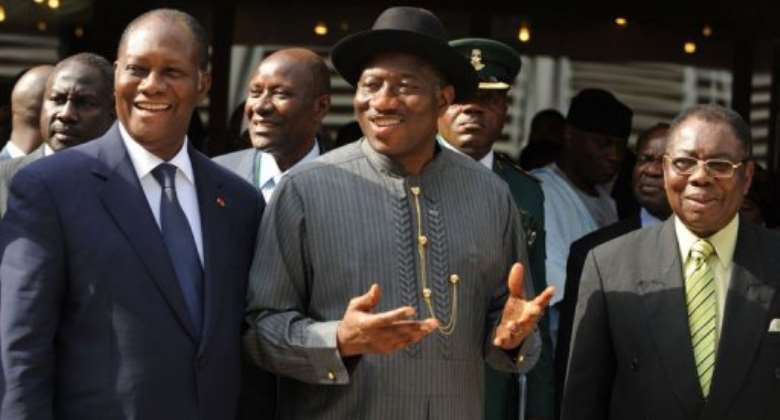 Outgoing chief Goodluck Jonathan of Nigeria announced at the body's summit taking place in Abuja that the group had "unanimously agreed" that Ouattara take the helm of the Economic Community of West African States (ECOWAS).

Ouattara's election to head the 15-nation bloc marks the return to the regional stage of Ivory Coast, recently shaken by deadly violence sparked by a disputed election.

One year ago, Ouattara was largely confined to an Abidjan hotel by his political foe, ex-president Laurent Gbagbo, who had refused to accept defeat after a November 2010 vote.

Gbagbo's refusal to quit triggered conflict which left around 3,000 people dead before Ouattara took power. Gbagbo is now awaiting trial by the International Criminal Court, accused of crimes against humanity.

Ouattara, 70, a former International Monetary Fund economist, had been the favourite to take the key job, which carries a one year mandate.

"Politically, this is a strong signal because Ivory Coast is out of the post-election crisis," said a West African diplomat. "It is a way of saying the community fully supports Ivory Coast."

He added the move would also help "mobilise resources" to the world's top cocoa producing country.

The two-day meeting has also been dominated by concerns over deteriorating security in the Sahel region that stretches across Africa south of the Sahara.

Insecurity in the Sahel, worsened by the influx of weapons from the Libyan conflict, was a major concern at the opening of the summit on Thursday.

ECOWAS member Mali, one of the Sahel states repeatedly targeted by Al-Qaeda's north Africa branch, has also been forced to combat a fresh offensive launched last month by Tuareg rebels.

The rebels have attacked several northern Mali towns since January 17, part of a long-running battle to demand autonomy for their nomadic tribes.

They may have also forged a link with the Al-Qaeda's regional affiliate, France said this week.

The Nigerian leader also announced the appointment of Kadre Ouedraogo, currently Burkina Faso's ambassador to Belgium, as the president of the ECOWAS commission, the governing wing of the bloc.