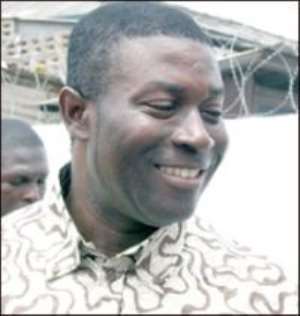 
NPP Communications Director, Nana Akomea
The New Patriotic Party has condemned in no uncertain terms the “desperate, irresponsible and criminal efforts” by the Communication Directorate of the Presidency to lead a campaign of insults and lies against the personality of the party's presidential candidate, Nana Akufo-Addo.

“This week alone we have seen this evil tactic being manifested through the sponsorship of false publications to tarnish the image of our Presidential Candidate, Nana Akufo-Addo,” a release issued yesterday and signed by Curtis Perry K. Okudzeto, a Deputy Director of Communications, stated.

The release added: “This week, the Castle propaganda engineers went as far as to doctor a scene from the film, An African Election, a documentary that was aired by the Ministry of information sometime last year, and authored by Jarreth Merz a film maker. A scene from the documentary was doctored and published by a pro Mills newspaper and on YouTube, and followed up, with a Deputy Minister of State, national executive members of the NDC and other members of Government's Communication Team falsely accusing the NPP flagbearer of having 'fondled' a make-up artist at GTV during the 2008 elections.”

According to the release, the “doctored video... has been worked on to suit the propaganda value of Prof Mills and his young and inexperienced communications team. The scenes in the clip put out by the rented NDC press do not reflect what is captured in the documentary.”

“Furthermore, the vile description of what transpired in the movie as put out by the NDC communicators is a total opposite of what the NDC media and hatchet men are seeking to portray to the Ghanaian people as was carried in the original documentary,” he release added.

The woman, in question, has since come out to repeatedly deny the story in various radio interviews, expressing her “shock and disappointment” at the false allegation.

“We wish to categorically state that no such sexual harassment happened and that this is yet another example of a government that has completely given up on any hope of winning this year's election based on its performance. This kind of dirty campaign would not offer any refuge for those who promised a 'Better Ghana' and ended up moving the nation backwards,” stated the release.

The release also made reference to “the false publication in the Daily Graphic of Monday, February 13, 2012 that a convicted Ghanaian drug trafficker, Raymond Amankwah, was a holder of a Ghanaian diplomatic passport, said to have been issued to him by Nana Akufo-Addo, when he was arrested in Brazil in 2007.”

“Though this story was quickly exposed to be a total fabrication, which did not stop official members of Government's Communications Team and Castle-sponsored newspaper editors from falsely accusing our flagbearer of issuing the non-existent diplomatic passport when he was Ghana's Foreign Minister,” the release lamented.

According to the NPP, the smear campaign from the Presidency “only confirms the overwhelming perception out there that President John Atta Mills and his government have really lost touch with the concerns of the ordinary people of Ghana.”

“We wish to send a message to President Mills and his Communications Team at the Castle that no amount of false allegations and dirty campaign against the New Patriotic Party and its 2012 Presidential Candidate will succeed. Indeed, nothing can divert the attention of the good people of Ghana from the failures of the Mills-Mahama administration,” the release stressed.

Court issues warrant for arrest of Xavier Sosu for 'disrespe...
36 minutes ago