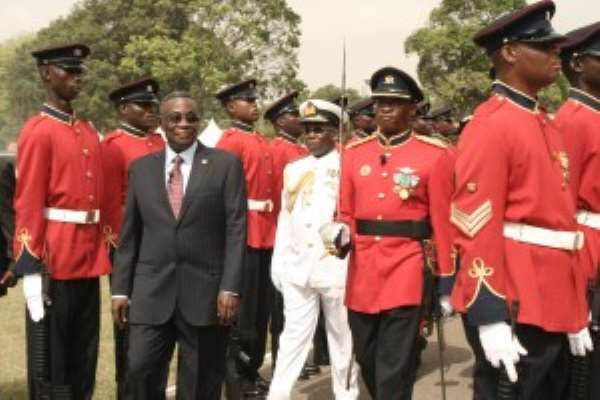 The Minority New Patriotic Party (NPP) Members of Parliament, yesterday took politics to another level, when they simultaneously pulled what is known in football parlance as the 'red card,' and showed it to President John Evans Atta Mills immediately he finished delivering his fourth State of the Nation Address to the August House.

In a typical Pierluigi Collina style in marching off a player in a tensed European Champions League final, the minority members, dressed in mourning attire, moments after the President's address, blew a whistle to draw the President's attention to their corner, only to show him a red card before he took his seat.

The 'red card', The Chronicle later learnt, was meant to bid farewell to the number one statesman of the land for his last term in office.

'The red card was an indication of his last term. Come December 2012, Mr. Mills will not be the President, and that is how we and a lot of Ghanaians feel,' noted the Ranking Member for Government Assurances and Member of Parliament (MP) for Aburi-Nsawam, Osei Bonsu Amoah, in an exclusive interview with The Chronicle shortly after the President's State of the Nation Address.

To Mr. Amoah, the Minority's stance in mourning the state was in solidarity with numerous Ghanaians hard hit with the brunt of bad governance being presided over by the Associate Law Professor.

Speaking in a relaxed tone, but sounding bitter, Mr. Amoah said, 'We are mourning the state of Ghana. We don't think Ghana is being run well at all. We think that there are several difficulties, and we should all be sad the way the country is being run. The best way to express it is to be in mourning clothes. When you are sad, you wear dark clothes to express how sad you are. We are sad for the country in several sectors – good governance, health, education, corruption and everything that you can think of.'

On her part, the Ranking Member for Foreign Affairs and MP for Weija, Shirley Ayorkor Botchway, said the payment of GH¢600 million as judgment debt to certain individuals and institutions calls for serious deliberations on the state of the economy, hence the mourning by the minority members. She could not fathom why out of the GH¢600 million, GH¢52 million went to Mr. Alfred Agbesi Woyome for apparently no work done for the state.

'This is a time for mourning for Ghana. The NDC has put us in a worse situation. Over 600 million cedis paid as judgment debt, and out of this amount, GH¢52 million went to one person who didn't even have a contract. Some of the money has been paid to people, supposedly, to stools in different parts of the country, and the chiefs have not even received them. There is serious corruption in the country. The NDC are bleeding Ghana dry, and we are very sad for Ghana. We showed the President a red card, because he has failed in all the sectors of the economy,' the MP for Weija asserted.

Also commenting on the President's statement was the MP for Techiman North, Prof. Ameyaw Akumfi. In an up-close interview with The Chronicle, Prof. Akumfi said the true state of the nation was missing in the President's address. To him, pressing issues such as the STX Housing deal, and the onetime single payment of the National Health Insurance Scheme, were all missing in President John Evans Atta Mills' address.

'I missed the actual state of the nation address to be frank. What was clearly missing was anything on housing - the fear being that the STX deal was going to be exposed - what the government was going to do about housing - he didn't touch on it all. For the first time, again, we didn't hear anything about the single payment on the Health Insurance - why the absence? The National Health Insurance is on the brink of collapsing, and yet you get the picture painted as if all is well. No, all is not well, and it was quite revealing that we are not talking about single payment anymore,' he averred in frisky voice.

Mr. Mills' statement, he noted, was terrible, since he failed to give a proper overview of what was happening in the country. To him, what the Associate Law Professor delivered on the floor of the House was a pre-budget statement.

On his part, the Ranking Member of the Special Budget Committee and MP for Wenchi, Prof. George Yaw Gyan-Baffuor, criticised President Mills in his attempt to bring division among the people, especially, the Ashantis.

'Dividing the people again after all these divisions; I don't think the President did the right thing by citing the Ashanti Region. That was wrong,' he argued.

He was also not happy with the way the President called for collaboration between the Judiciary and the Executive arm of governments in clamping down on corruption in the country, since the two institutions had separate powers in the discharge of their duties.

'There is a clear separation of powers between the Executive and the Judiciary. The President should never make such a comment that he wants collaboration with the Judiciary, and that the judiciary has been seen fighting the wrongdoers. I was shocked when he made such a statement. He shouldn't ever say that, because there is a clear separation between the three branches (Executive, Legislature and Judiciary) - you do yours, I do mine, and there is nothing like collaboration among them.'

'There is no way that you have to go publicly on a podium like this to say that our Judiciary is not dispensing Justice - that was wrong. I was shocked. I cannot forgive him as a Head of State who knows that all these branches are separate, and also a Law Professor who knows that you should not interfere in the affairs of the judiciary. You cannot use the pulpit here to interfere in their affairs,' he intoned.

But, in a sharp rebuttal, a Minister of State at the Presidency, John Gyetuah, told The Chronicle that the President should be commended for touching on all the sectors of the economy in his address to the nation.

'I believe the President's statement is superb. I believe he touched on all the sectors of the economy, with regard to inflation, growth rate, and all the infrastructural development in the country that his administration has been able to produce,' he noted.

He gave thumbs up to the President for pronouncing publicly the will and determination to conduct credible and peaceful elections, come December 2012.

He described the mourning by the minority as a celebration of defeat of their flagbearer, Nana Addo Dankwa Akuffo-Addo.

'Their mourning is a celebration of the death of their flagbearer, Nana Akuffo-Addo, but not President Mills,' he added.

Also contributing to the President's address, was the MP for Shama. He praised Mr. Mills for managing the economy efficiently, and addressing the hardship conditions of Ghanaians that he inherited from the previous administration.