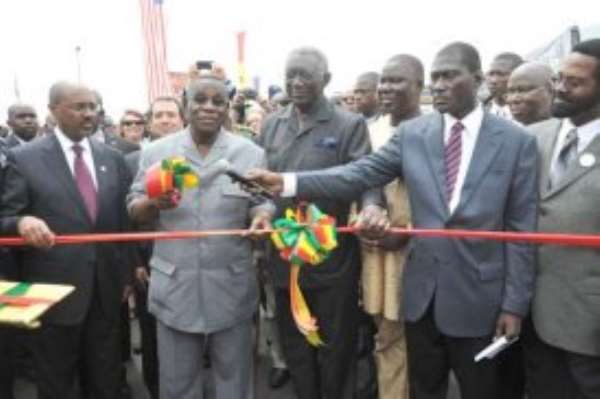 Presidentâ€ˆJohn Evans Atta Mills has inaugurated the Tetteh Quarshie Interchange-Mallam Junction highway project, saying that he was delighted that the project would benefit all Ghanaians.

He acknowledged that the project was initiated by the Kufuor administration but had been duly completed by his administration for the benefit of Ghanaians.

The 14-km road project, which was constructed at a revised cost of $55.7 million, was undertaken in two lots.

Lot One involved the construction of a three-lane dual carriageway from the Tetteh-Quarshie Interchange to the Apenkwa Interchange, covering 5.53 km, while Lot Two involved the upgrading of the highway from the Apenkwa Junction to the Mallam Junction, including the upgrading of the existing two-lane carriageway into a three-lane dual carriageway with wide shoulders, a footpath, a bicycle lane and a median.

The project, which was christened the “George Walker Bush Motorway”, received funding under the Millennium Challenge Corporation (MCC)â€ˆof the USA and was administered by the Millennium Development Authority (MiDA).

President Mills said the highway would not be used by only members of the New Patriotic Party (NPP) or the National Democratic Congress (NDC) but by the generality of Ghanaians who had co-operated for its successful completion.

He said the project demonstrated the bond of friendship between Ghana and the US and also confirmed Ghana’s democratic values which thrived on the rule of law, accountability and respect for human rights.

He lauded the MCC, MiDA, the contractors and all those who contributed to the success of the project, stressing, “We must all be grateful for all the blessing.”

He urged the public to take good care of the project and stressed the need for strict observance of road regulations.

He thanked the MCCâ€ˆfor considering Ghana for the project and gave the assurance that everything would be done to protect the property.

President Mills implored those who were resettled as a result of the project not to encroach on the land reserved for future development of the road.

The Minister of Roads and Highways, Mr Joe Gidisu, said the funding of the project confirmed the deepening democratic credentials of Ghana, considering the fact that the compact was initiated by the previous NPP government, while the execution of more than 90 per cent of the project was by the NDC government.

He said a pilot traffic arrangement had been put at vantage points for People With Disabilities (PWDs) to safely utilise the road.

In his welcoming address, the Board Chairman of MiDA, Prof Samuel K. Sefa-Dedeh, said Ghana’s pro-poor compact had, indeed, been the most complex and most ambitious approved by the MCC and had remained so till today.

He said It was worth noting that the government had provided $75 million for the relocation of existing utilities such as water, electricity and telecommunication lines and to support the compensation of some 7,000 affected people who resided on or earned their living from the road corridor.

The Chief Executive of the MCC, Mr Daniel Johannes, said the fact that the project had begun in the previous administration and ended in the Mills administration made Ghana’s democracy unmatched in Africa.