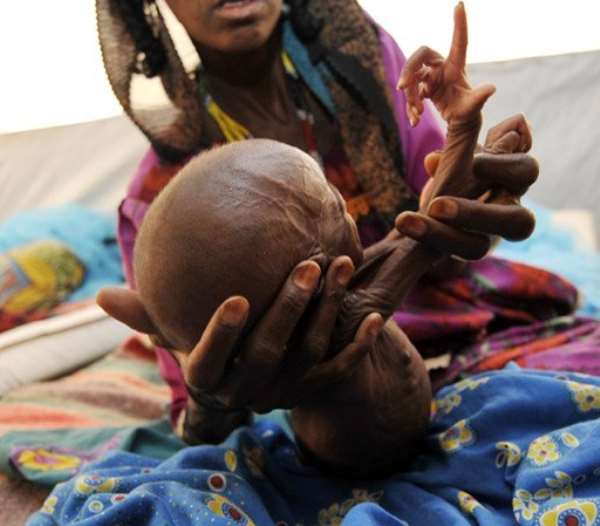 "Around 725 million dollars is what is assessed to be needed this year," Helen Clark, head of the aid agency UNDP, said after the meeting, which also included the EU's Commissioner for Humanitarian Aid Kristalina Georgieva.

The European Commission announced at the talks it was donating 30 million euros to support feeding programmes for one million children under the age of two and half a million pregnant women and breast-feeding mothers.

"We have a short time to act. Drought is on the way but it can also be avoided. We have two or three months. No more than that," said Jose Graziano da Silva, the director of the Food and Agriculture Organisation (FAO).

"This is a very conflicted region. Food insecurity can be one important factor to bring conflict so we also need to avoid this," he said.

Georgieva said: "If we are to be successful in the Sahel, we must address the needs today but in a way that makes the region more resistant."

The meeting was being hosted by the World Food Programme (WFP), which is aiming to provide assistance to nearly eight million people across the vast region including to Burkina Faso, Chad, Mali, Mauritania and Niger.

Late and erratic rains in the Sahel have ruined crops across a vast swathe of territory. Harvests have fallen by as much as 46 percent in Mauritania and Niger estimates that over 5.5 million people in the country are at risk.

"The window of opportunity to save millions from malnutrition in the Sahel is rapidly closing," said WFP head Josette Sheeran.

"We've already received over 100 million dollars to act," she said, adding that the agency had a new foreign purchase facility to help position food stocks and stave off a humanitarian disaster.

"We've been able to pre-position 64,000 metric tons of commodities, including nutritious supplemental food for children, enough food to feed four million people for a month," she said.

Sheeran said that 20 percent of the emergency funds deployed would be in the form of "cash and vouchers to allow small-scale food sellers to supply the food," which would be procured nearby to reduce the time it takes to arrive.

In a joint statement, the UN and EU aid chiefs said there should be "an urgent scale-up" in relief efforts because of the combined effect of drought, high food prices, displacement and conflict in the region.

"The time for humanitarian action in the Sahel is now," it said.

The International Federation of Red Cross and Red Crescent Societies (IFRC) warned in a statement Tuesday that the emerging crisis in the region was underfunded because early warnings are going unheeded.

"IFRC is urging donors to come to the aid of the Sahel but also to invest in longer term resilience to break the cycle of chronic food shortages in the region," the statement said.

The effects of climate change mean that droughts are becoming increasingly common in the desert region, the WFP said.

"This is the third drought to hit the Sahel in less than a decade... many families have not yet fully recovered from the last drought in 2010 and have even less to fall back on now than they did then," the agency said.

"The food crisis this year is unfolding across the entire region, from Chad in the east all the way to the Atlantic Ocean. Moreover, food prices in the region are much higher than they were in 2010," it said.

As well as urgent financial assistance, the aid chiefs also stressed the importance of preventing future catastrophes by teaching people in the region to harvest rainwater and grow draught-resistant crops.

I regret connecting the guy who secretly recorded Akufo Addo...
30 minutes ago

Let’s go to swear Nogokpo if you're not corrupt – Fiifi Kwet...
32 minutes ago