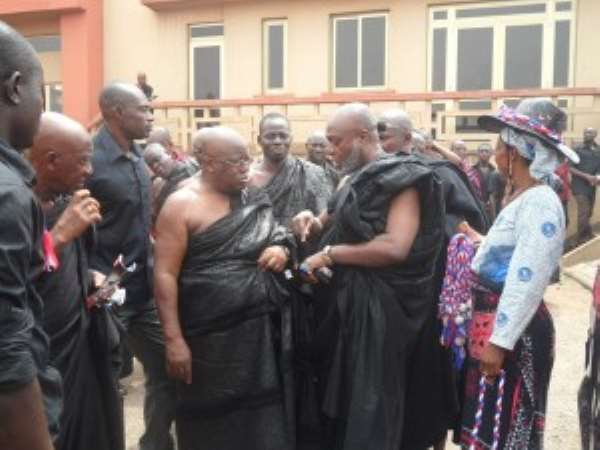 WHAT WAS expected to be a solemn occasion to bid final farewell to the late New Patriotic Party Constituency Chairman for Manhyia, Nana Osei Mensah over the weekend, was nearly turned into political rally grounds, when the flagbearer of the party, Nana Addo Dankwah Akufo Addo stormed the place to join in the commemoration.

The Prempeh Assembly Hall, which was the venue for the somber event was flooded with hundreds of people, when reports went round that Nana Akufo Addo had arrived at the place, with supporters jostling and bustling to catch a glimpse of the man they believe would be the next President of Ghana.

The atmosphere at the event got emotionally charged when the NPP flagbearer took his turn to pay tribute to the late chairman of the party, extolling the virtues of the man, who in his life time gained the accolade of 'Chairman of Chairmen Association' in the region.

The supporters could not hide their joy and excitement at seeing the leader of their party, as they danced and chanted -'All Die Be Die', 'Nana You are Our Hope' and other campaign slogans.

Try as the flagbearer did to calm down the expressively charged supporters to let them realize the occasion was a solemn one and that he had no intention to turn it into a campaign rally, he was unsuccessful as the vociferous supporters kept on chanting.

The personal bodyguards of the flagbearer also had a tough time controlling the crowd, as everybody struggled to catch a glimpse and possibly shake hands with their idol politician.

However, the ecstatic moment gave way to chilling silence and sobriety when Nana Addo took the centre stage to read his tribute, for someone he considered a strong pillar of the NPP.

Describing his loss as irreplaceable, the NPP flagbearer said the late chairman would be fondly remembered by every member of the party for his selfless dedication to the foundation of the UP tradition in the late 70s, which resulted in his exile abroad after persistent political persecution.

'Even in opposition, this man never relented in his love for the party; he was not afraid to give his money for the development of our party, the NPP has indeed lost a valuable asset whose replacement would be very difficult,' Nana Addo observed amidst sobbing.

Nana Addo said the late chairman was a father, a personal advisor and a political mentor who led an indelible impact on his political career, stressing that the party would forever be grateful to him.

The late chairman, who died in December last year, after battling long term ailment, was said to have contributed immensely to the formation of the New Patriotic Party. He was 76 and was survived by 22 children and two widows.