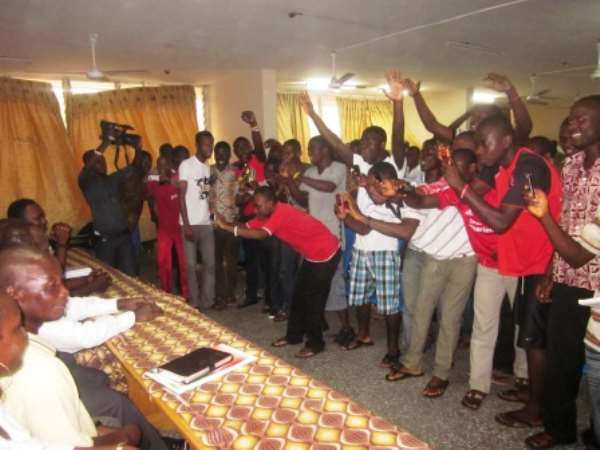 THE 2008 Presidential candidate for the Convention People's Party, Dr. Papa Kwesi Nduom, who is now seeking to become the flagbearer of a more formidable political force, Progressive People's Party, made a triumphant entry into the University of Cape Coast last Friday, 10th February, 2012 to meet with members of the Progressive Youth Movement, which represents the Tertiary wing of the PPP for their inaugural ceremony.

Hundreds of students stormed the Valco Hall JCR, where the event was held to catch a glimpse of the man popularly called “Edumawura” and also described by many as the most innovative political personality in Ghana today. The personal body guards of Dr. Nduom had a tough time controlling the crowd who made frantic efforts to shake hands with him.

Dr. Papa Kwesi Nduom who did not do so well in the 2008 election told the crowd that he came to announce his readiness and determination to work hard to capture power in 2012 from the National Democratic Congress (NDC) and also break the syndrome of one-way NDC/NPP dominance, whose stewardships have not been able to bring about the true development that the masses have been looking for.

Dr. Nduom assured the students that when he becomes president, he would focus on the total eradication of malaria, free compulsory education, job creation, strengthening of and separation of powers in state institutions with specific reference to offices of the Attorney General and Chief Justice, stating that the Minister of Justices should be the Legal Advisor to the President while the Attorney-General should be an independent prosecutor free from partisan politics and is Ghanaians' own lawyer who exudes fair justice and decides who goes to court and who doesn't. This he believes will curb a lot of the mishaps in the country at the moment where undeserving personalities can swerve the law and benefit from state funds which they do not deserve in the face of serious unavailability of jobs for graduates, malaria related deaths, poor road networks, unpaid NYEP allowances, increment in petrol and petrol products, high cost of living.

Dr. Nduom went on to challenge the students to assess all the three parties' flagbearers ie. PPP, NPP and NDC and tell who is best fit for the job in terms of achievements, past performance in governance and family life, and they will find out that “Edwumawura” is best for the job. This is because with the help of God he and his family have been able to provide jobs for over 3000 Ghanaians majority of whom are graduates from our tertiary institutions.

The new executives of Progressive Youth Movement from the University of Cape and Cape-Coast Polytechnic were sworn in by the interim National Youth Cordinator, Mr. Divine Nkrumah. Mr. Nkrumhah asked the students to work assiduously to the best of their abilities to recruit more people and increase the membership of the PPP, which will eventually translate into visible votes come 7th December 2012.