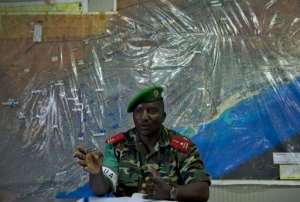 MOGADISHU (AFP) - African Union forces in Somalia are planning to attack a stronghold town of Al-Qaeda-linked Shebab rebels to the west of the war-torn country's capital, a commander said Sunday.

Audace Nduwumunsi, the AU force's deputy commander, said the troops are planning to raid Afgoye town, which is some 30 kilometres west of Mogadishu and hosts the biggest population of displaced Somalis.

"The battle for Afgoye will start very soon. We will start attacking Afgoye very soon, but that depends on the circumstances then," Nduwumunsi, told AFP, but did not give an exact date.

"We will avoid civilian casualties," he added.

Much of southern Somalia is under the control of the extremist Shebab militia fighting to overthrow the Western-backed Somali government.

The Shebab abandoned fixed positions in Mogadishu last August, but has continued to carry out grenade and suicide attacks on government targets in the anarchic capital.

In January, the AU urged the United Nations to boost its forces to 17,731 troops from the currently authorised maximum of 12,000.

Nduwumunsi said Burundi and Uganda, which form the bulk of the force, will deploy more troops if the increase is authorised.

The Shebab have been facing increasing encirclement by regional forces, with Kenya battling the insurgents in the south of the country and Ethiopia stationing troops in western Somalia.

A Kenyan military spokesman said Saturday that since Nairobi sent troops to fight the Shebab in October, the insurgents have been weakened and their revenue sources disrupted.

Nduwumunsi added that the AU troops were also targeting the key southern port town of Kismayo, currently under Shebab control.

"Kismayo is a crucial target because the Shebab earn a lot of money from this port. We will take Kismayo come rain come sunshine," the commander said.