ATTA MILLS IS BLIND, AKUFFO-ADDO IS NOT, AND SO WHAT? 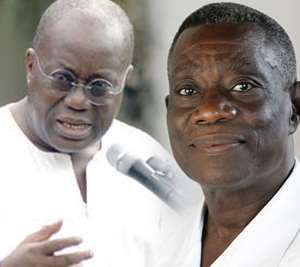 I am appalled by the constant barrage by NPP circles making news of President Mills' alleged blindness or illness of some sort. Such constant attacks that follow each time the President travels outside the country only reveals the disregard NPP has for the disable, the sick, and least fortunate Ghanaians who may be less healthier than the NPP Flag bearer. Ironically, the NPP leadership trip often to places in the US, including the Empire State, for their own selfish and parochial interest yet they forget that until recently, the [arguably] greatest State was ruled by a blind Governor in the person of Gov. David Paterson.

Good people of Ghana, my fellow Citizens, let us not be psyched by the orchestration of NPP machinery to coerce us to believe blindness is an impediment to successful leadership. Leadership has no correlation to physical sight, at least in government. If that argument was true, as NPP lambasts, the best leaders would have been eye doctors. Is NPP telling us that their leader, Nana Akuffo-Addo, has better sight than Alan [Cash] Kyeremanteng? This is pure propaganda. Any party that respects people in our society with illness or deformities such as blindness, HIV, MS, etc. will not sporadically bring the issue of the President's alleged blindness to cast doubts to his ability to lead. I hope any person leaving with any form of illness will think twice who they may vote for this 2012.

Good people of Ghana, as we vote later in the year, let us consider every issue before casting our vote. For example, “all die be die” is a statement you would expect from rebel leaders but not a politician who is determined to be President. That statement is a no-vote for that individual. I have said this once, and twice today I say again, that I will rather have inefficient government and my life than an efficient government without my life; think about that! Also, it is always easier to curb breeds of evil in the lower rank and file of any political party than those evil breeds that germinate at the top or have the support of the leader. I guarantee you that Karbo [NPP Youth Organizer] could have never beaten the war drums if he did not have the support of the leadership; it is fair to say he echoed the voice of his leader.

Good people of Ghana, we have come way too far since, 31yrs+, to have our children, brothers, sisters, parents, and our neighbors killed over a leader of some opposition political party who will do anything to become President. What that leader doesn't tell you is that he will fly his family abroad, and he will be surrounded by bodyguards whereas you are left to deal with sorrow, pain, the danger, and anger due to the consequences of the war, if you survive. After all, a change of government will not have any direct impact on your lives; your house will neither be repainted nor will you be given free money as we were once made to believe [Prof. Mills]. Rewind to 1992-1999, we were made to believe things were soo bad that if then Prof. Mills won, we will die of hunger, and that NPP was the solution so we rallied behind former President Kuffuor. When he won, we heard the political excuses and the petroleum increases, the cronyism, the cocaine trades, [NPP MP is still in prison in the US for cocaine], etc. (I am not arguing Kuffuor didn't do anything for Ghana, all past Presidents did something, but was it enough?). NDC also sounded the same drum between 2000-2008, and Ghanaians voted for them into power and now we see similar trends of corruption, petroleum prices increase (not recently though), inflation, etc. and now NPP is calling the same old shots again. Do you still believe NPP can do something magical? Enough with their nonsense manipulations!

Fellow Ghanaians, this is what I believe will help move Ghana forward. Parliament must work together without regard to partisan agenda. Politicians must stop the influx of insults that tend to derail their attention from working to move the country forward, corruption must be reduced to zero, and former leaders must come together to work in the interest of the country. I am not a buyer of the idea that leaders are humans like you and I therefore they should be allowed room for errors. I do not allow them such rooms because they are not the same as you and me; they have advisors that are supposed to catch their mistakes before they become public. Any leader that is found of making mistakes (including lose talks) only tell us three things; either the leader's advisors are useless, or the leader is, or both are.

In summary, do not be deceived on President Mills' alleged frail health/blindness, condemn any call for war, avoid the trap to believe that a change of government will ease your economic condition, call on Ghana Parliament to work together, demand that Politicians offer constructive criticism, and finally, urge former Presidents Rawlings and Kuffuor to bring their diverse background to the table as Statesmen. My personal opinion is that we vote for the NDC 2012 and NPP 2016.

Thank you to the hundreds of fans who emailed me, and appreciated my straight talks. You are the reason I keep “talking” without fear or favor. After all, I was NPP and I now rallying for NDC (2012) because NPP has lost touch with the people. I may be back with NPP 2016 when Alan Cash or Dan Botwe is onboard to fight to preserve their lives of the people rather to push them to lose their lives.