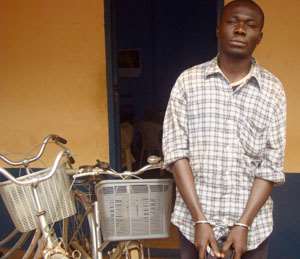 A  TAMALE Circuit Court presided over by Senyo Amendahe has sentenced a notorious bicycle thief to five years' imprisonment in hard labour for stealing.

The convict, Cyrus Anokye aka Kwame Yeboah, 27, was said to have stolen a number of bicycles belonging to pupils of various Junior High Schools within the Tamale Metropolis.

According to the police, he claimed to be a teacher of Hope of Glory International School in Tamale but was busted for attempting to steal some bicycles and handed over to the police, who arraigned him before court on charges of stealing.

The complainant in case is the headmaster of Dahensheli Primary School located at NORIP Village, a suburb of Tamale, who expressed worry about the spate of bicycle theft in the area.

The theft was reported to have attracted wild criticism from parents, who accused authorities of the school of laxity, leading to the numerous cases of bicycle theft in the school.

It was against this background that management stepped-up its security measures to apprehend persons responsible for the crimes.

The suspect was said to have always posed as a teacher of Dahensheli Junior High School, and begged for bicycles from pupils but failed to return them.

On February 3, 2012, he was reported to have gone to the school in an attempt to steal another bicycle but was immediately identified by one of the sellers at the school's common market, leading to his arrest.

Cyrus Anokye was immediately handed over to the police and upon interrogation, he admitted the offence in his caution statement and divulged his modus operandi to the police, claiming he stole about 5 bicycles from the school.

But authorities of the school indicated that more than 8 bicycles had gone missing in the school, accusing him of being the brain behind the disappearance of the bikes.

He was subsequently put before court and charged for stealing.

He pleaded guilty and was sentenced on his own plea.

Anokye was fined GH¢500.00 or in default serve a 5-year jail term but he opted for the latter as no relation was ready to pay the fine.