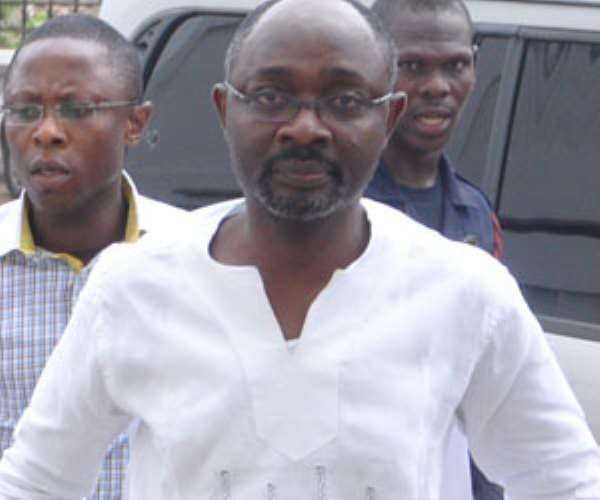 Some 15 chiefs and queen-mothers from the Volta Region yesterday stormed the Police headquarters in Accra to solidarise with their kinsman, Alfred Agbesi Woyome, who is being held over his role in a record financial scandal of GH¢51 million.

The chiefs, mostly from the Tongu area in southern Volta, are demanding that the President immediately release the man they revere highly and whom they have described as a true son of their part of the region so that he can prepare his defence.

Their visit comes on the heels of a similar one by National Democratic Congress (NDC) executives- Party Chairman Dr. Kwabena Adjei and Propaganda Secretary Richard Quashigah.

Like the NDC executives, the chiefs and queen-mothers had easy access to the man whose name is now synonymous with financial misdemeanor of mammoth proportions.

Woyome, they posited, would not run away and therefore he should be granted freedom.

Like the Volta Caucus in Parliament, they too expressed disdain at the manner in which a man they described as an active NDC personality was humiliated and arrested.

The gentleman, according to the chiefs from Fiave and Agave in Southern Volta near Sogakope, was on his way to condole his relatives upon the death of his aunt when he was seized by policemen in traffic, according to Togbe Ahli who led the team.

They added that their visit was to solidarise with Alfred Woyome and to find out his state of health as he is being held by the security agency.

The visit of the chiefs, who could not conceal their political colours by their statement, prompted questions among a broad spectrum of Ghanaians about how traditional rulers would align so openly with a political party and a serious fraud case like the Woyomegate.

With their positions clearly stated, they would be hard-pushed to accept the outcome of any investigations about a man they consider a leading member of the NDC and a son of their land.

The Woyome issue continues to be central to most political discussions in the media, with discussants entrenched in their positions.

While most discussants demand that the money be refunded at the end of the day, others have wondered how this end could be met, given the long list of beneficiaries.

It is one of the most polarised issues in the country today as both NDC and the NPP continue to talk about it.

The propaganda wing of the NDC is particularly active in the past few days, seeking to introduce allegations against their opponents with a view to, as observers point out, overshadow the Woyome debacle.

It is difficult how this end can be achieved given the daily revelations about the so-called beneficiaries of the Woyome largesse.

The tit-for-tat political gymnastics between the two largest political parties is becoming funny. The Propaganda Secretary of the NDC, Richard Quashigah, has already gleefully pointed out that their prized catch is singing loudly and very soon the dropped names would be made public.

Similarly, the NPP has information that Woyome is cooperating with the CID regarding dropping names of political office holders, especially ministers in the current administration who have partaken in the Woyome windfall.

Most Rev. Atuahene Advocates For Peace Ahead Of Voting Day
42 minutes ago