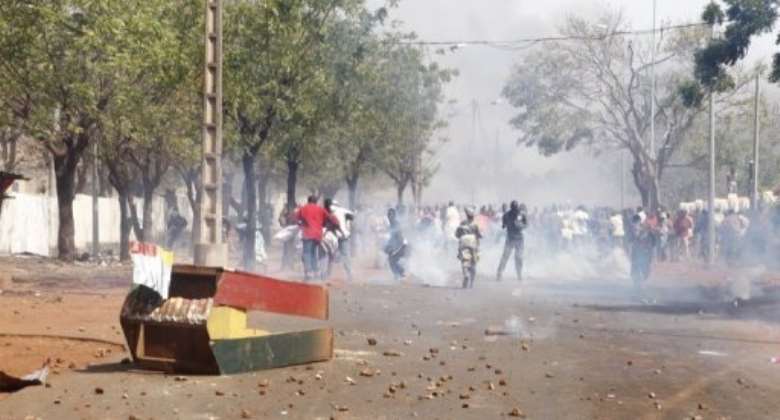 Supporters of Malian soldiers fighting Tuareg rebels, clash with security forces during a protest. By (AFP/File)

Witnesses and army officials reported army helicopters were hitting targets in the north-east to prevent the rebels from moving towards Kidal, the region's biggest town.

UN chief Ban Ki-moon on Wednesday urged an end to the fighting as the Tuareg seized the town of Tinzawaten, after weeks of attacks on small desert towns which have seen more than 20,000 flee to neighbouring countries.

The Red Cross said Thursday that "at least 30,000 people are displaced in Mali and living in extremely precarious conditions."

The global humanitarian organisation said it had been able to visit 13 soldiers held "by an armed group" in northern Mali, without disclosing where they were being held.

This is the first indication of how many soldiers have been captured in a region where information cannot often not be independently verified.

The Azawad National Liberation Movement (MNLA) and other Tuareg rebels -- boosted by the return of men who fought in Libya for toppled leader Moamer Kadhafi -- are demanding greater autonomy for their nomadic desert tribes.

The MNLA was formed at the end of 2011, and on January 17 launched the first offensive since a Tuareg rebellion ended in 2009.

The Tuareg have long sought to take over the northern part of the bow tie-shaped nation, and government has managed to stamp out previous rebellions with rafts of peace accords and promises.

The insurrection is a heavy blow for Mali, which is heading to April presidential elections already plagued by actions of the radical Al-Qaeda in the Islamic Maghreb.

It is also one of the Sahel nations facing a severe food crisis after poor rains in 2011 led to a weak harvest and elevated food prices.

The battle between Tuareg rebels and government forces is "aggravating an already dire humanitarian situation throughout the Sahel region," said Ban's spokesman Martin Nesirky on Wednesday.

Ban called on the rebel groups "to immediately cease their attacks and to engage in dialogue with the government of Mali to resolve their grievances." He offered UN support for efforts to find a peaceful solution.

Both the army and rebels are believed to have suffered severe losses as about seven towns have been attacked, but it is not possible to independently confirm figures given by either side.

Malian officials say their strategy is to let the rebels take military barracks in the small towns while focusing their energies on the large northern towns of Kidal, Gao and Timbuktu.

Despite calls for calm and tolerance from President Amadou Toumani Toure, the capital and other cities were hit by often violent protests last week by soldiers' wives and others angry over government's management of the situation.

The anger spilled over into xenophobia as Tuareg and other light-skinned populations had their homes and property vandalised.

Malian Foreign Minister Soumeylou Boubeye Maiga last week held talks in Algiers with a delegation from a Tuareg movement, the May 23 Alliance, believed to be fighting alongside the MNLA. Both parties called for a ceasefire.

However MNLA leaders in Mali distanced themselves from the talks, saying they were not bound by the decisions taken.

Last week US State Department spokeswoman Victoria Nuland said the United States was deeply concerned by the ongoing violence. "We condemn the attacks by armed groups against a number of northern towns," she said.

Many Tuareg left for Libya where they later fought alongside Kadhafi. However after his death they returned, heavily armed, to their home countries.