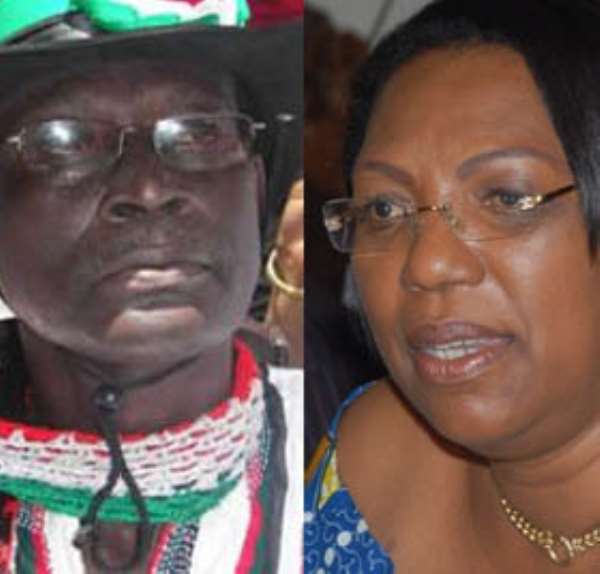 The GH¢51million Woyome scandal that has rocked the ruling National Democratic Congress (NDC) appears to be tearing the party apart as party chairman Dr Kwabena Adjei sends a message for an urgent meeting to resolve the intra party cracks.

A bloody battle has erupted in the corridors of power and the NDC over the incarceration of its financier and business mogul, Alfred Agbesi Woyome, with fingers being pointed and letters flying about over roles played by leaders of the party which led to Woyome's woes.

Betty Mould-Iddrisu, who authorized the payment, is already claiming that she only played an insignificant part of the gargantuan deal, shifting the blame to unnamed officials.

A letter dispatched to President Atta Mills by Dr Kwabena Adjei to key and influential members of the party including its founder, Jerry John Rawlings, has raised questions about the NDC's ability to win the 2012 general elections contrary to claims by the UK Economic  Intelligence Unit (EIU).

Even before the EIU whitewashing report was made public, Dr Adjei had warned of the impending implosion in the governing party.

In the letter dated January 10, 2012, the party chairman poured out his frustration: 'Your Excellency, Mr President, developments in our party, the National Democratic Congress, have become a source of grave concern to me and, I believe to all Ghanaians who love and cherish the party that you lead.'

Kwabena Adjei copied the letter to the party's founder because, according to him, 'so long as he lives and commands grassroots support, his relevance in our party affairs can neither be questioned nor treated with contempt.'

He demanded an immediate meeting to discuss and resolve what he described as 'very urgent disintegrative factional dynamics and processes within the NDC before it is too late for the 2012 general elections.'

Though he gave a one-week ultimatum for the meeting to take place, it appears President Mills treated the letter with contempt since party sources said there was no such meeting.

Dr. Adjei did not mince words in his correspondence and said he had been forced to write directly to the NDC leader and copied to founder JJ Rawlings because he had 'reached the limit' of his 'patience and tolerance'.

Alfred Agbesi Woyome
Dr Adjei raised the alarm that the NDC government had been hijacked by a few individuals obviously close to the president.

'Indeed, my impression is that most of our party members do not even feel that they belong to a party they aggressively defend. As a person who, without resources, contributed greatly to our electoral victory, all I have deserved are abuse, character assassination, blocking of my efforts and physical threats to my person,' he lamented.

'I can no longer put up with ongoing and well-known divisive machinations and schemes that threaten to wreck the party's very survival and my person as the popularly elected chairman.'

The party chairman stressed that President Mills would appreciate the seriousness of the threat to the NDC as a party if he was compelled to go public to cleanse his impugned reputation within the party and take the needed steps to straighten the party itself.

David Tamakloe
Some members of the NDC however do not seem worried over the GH¢51million judgment debt mistakenly paid to Woyome.

Instead, they believe he had been used as a sacrificial lamb to save government from being voted out of power ahead of the December 2012 elections.

Despite initial assurances by a youth group that identifies itself as 'Free Woyome Movement' to disclose the names of individuals behind the GH¢51million Woyome scandal, it failed to provide a single name.

At a press conference in Accra yesterday, the group only gave clues as to who the most powerful man seeking to visit evil on Woyome was.

Although it insisted names would be mentioned, the supporters of the beleaguered NDC strongman who financed President Atta Mills's re-election bid left journalists disappointed and angry as they struggled to produce the name of the state official it claimed was behind the attempt to persecute Woyome.

Spokesperson for the group, David Tamakloe, editor of the Republic newspaper, said accusing fingers pointed at one of the most powerful men within the government.

'This man is alleged to have met a prominent member of the Council of State of the Republic of Ghana, and proposed that the Council of State member should help him so that they would deal with former President Jerry John Rawlings and reduce the Ewe influence on the NDC party without jeopardizing support from the Volta Region,' he said.

Tamakloe said what happened to Woyome last Friday when he was arrested by agents of the Bureau of National Investigations for fraud was a deliberate attempt by some invisible hands to disgrace him.

'It is a big shame for our law enforcement agencies and government to perpetuate this sort of disgrace,' he said.

Woyome, together with three others including Samuel Nerquaye-Tetteh, the Chief State Attorney who allegedly refused to put up a defence against him in court as well as Paul Asimenu, Legal Director of the Ministry of Finance and Economic Planning, who purportedly quoted wrong figures that paved the way for Woyome to access the money, was on Monday refused bail for alleged fraud.