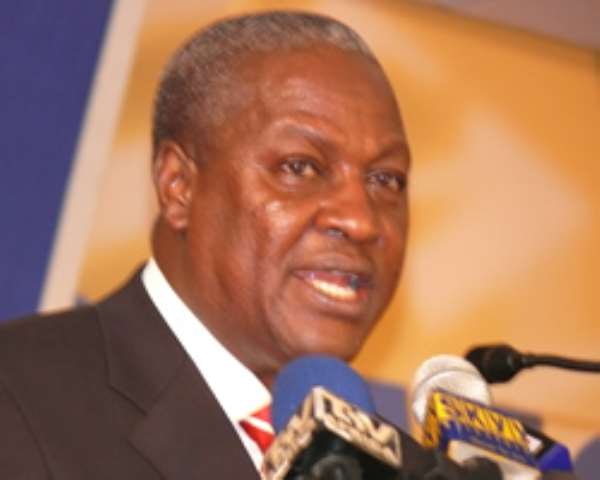 Vice President John Dramani Mahama, on Sunday advised religious bodies, especially the Church, to step up their strategies at eliminating religious charlatans, who were desecrating the name of God for selfish gains.

He said there were good and respectable men of God who were doing everything possible to imbibe the word of God for the benefit of future generations.

The Vice President said notwithstanding the conduct of the fake men of God which is indicting the reputation of the good ones, there is the need to weed out the bad nuts or charlatans.

Vice President Mahama gave the advice during an induction service for the new leadership of the Ghana Pentecostal and Charismatic Council into office, in Accra.

The leaders were Apostle Dr. Opoku Onyinah, Chairman of the Church of Pentecost, as President of the Council, Reverend Sam Korankye-Ankrah, founder and Apostle General of the Royal House Chapel International as first Vice President.

The council, among other activities, promotes good relationship and awareness among member churches and organizes programmes that maximize the potential of member churches at the city, regional and national levels.

Vice President Mahama said Government considers religious bodies as partners in development, and would expect them to educate their members on the need to avoid electoral malpractices and other forms of violence that could jeopardize the future of the country.

He advised the leaders to warn their members against multiple registration, as the biometric registration system can detect malpractices and lead to the arrest and prosecution of culprits in this year's general elections.

The Vice President cautioned Ghanaians not to take the peace of the country for granted, as neighbouring Ivory Coast, Sierra Leone, Liberia and other African countries were yet to recover from the repercussions of war.

He urged religious bodies to re-instate the virtues of love, respect, and extended family systems, which were being eroded by westernization and modernization.

Apostle Onyinah promised to serve all churches that constitute the council and the whole nation, and called for collaboration and partnership that would help them achieve those goals.

He promised that the church would intensify educational programmes against homosexuality, armed robbery and child trafficking, which were fast being established in the country, and called on other religious bodies to stand up against the menace.

Apostel Onyinah denounced the use of unprintable language in the media, and warned that such conduct, if not checked could escalate into dangerous tools of destruction and disunity.

He called on the Electoral Commission to exhibit high level of professionalism in the conduct of the 2012 General Election to avoid election-related violence and other forms of confrontations at the polls.

Rev. Professor Mike Oquaye, second Deputy Speaker of Parliament, gave the assurance that the New Patriotic Party would educate its members to adhere to rules and regulations governing elections, to ensure peace during and after the elections.

He appealed to the new leaders to work for God and the people and lead exemplary lives to serve as encouragement to the people.

Rev Francis Amenu, Moderator of the Presbyterian Church, Ghana, called on the leaders to extend their activities to the rural areas and reinvigorate the virtues of God as it was fading off in society. – GNA