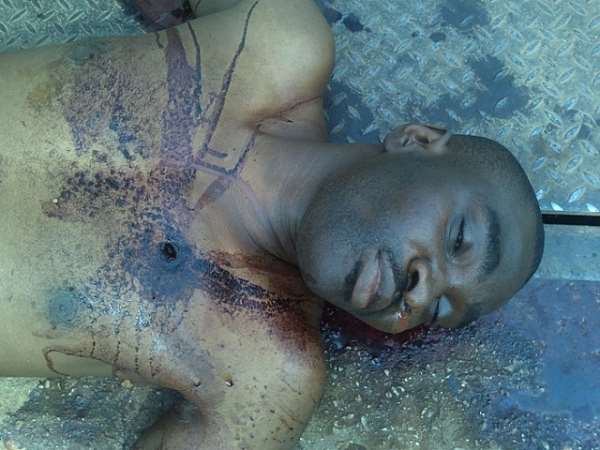 The family of a 29-year-old man who was allegedly shot and killed by a police patrol team last week Saturday is challenging claims by the Police in Kumasi that their deceased relative was an armed robber.

The family of Norman Addo, who was said to have attempted to rob a businessman of his Audi Saloon on Saturday, January 21, 2012, at Konkromoase, a fast developing suburb of Kumasi, is demanding full scale investigations into the matter to unravel the mystery surrounding the murder.

The family says they suspect foul play on the part of the police and the said businessman, who was allegedly a victim of the incident. They have, therefore, vowed to pursue the matter to its logical conclusion in order to preserve their dignity and that of their deceased son, whom they claim, had no criminal background.

According to the family members, who have since filed a petition to the IGP, they believe strongly that the police have not told the true story surrounding the incident and that they suspect an orchestration to shield the culprit.

The Head of the family and father of the deceased, Mr. Addo Acheampong contend that their son was allegedly murdered in cold blood by the said businessman and that the police were only brought in as a cover up in order to shield the civilian and absorb him of any criminal offence.

According to the father, the deceased suffers from schizophrenia, a mental disorder which sometimes makes him act strangely, including barging into people's apartment unexpectedly.

They disclosed that the deceased had been battling the ailment for some time now, and that neighbours within the vicinity were aware of this situation of the deceased.

The family, therefore, suspects that their son may have reacted to the effects of the disease and possibly invaded the house at such an odd hour.

Meanwhile, the Ashanti Regional Police Command has reacted to the claims by the family, explaining that the police acted professionally to save an innocent citizen from being robbed.

DCOP Patrick Eden Timbillah told The Chronicle in an interview that the police had no reason to doubt the authenticity of its actions and that claims by the family that the deceased did not go to the house to rob cannot be established.

'I personally received the distress call from the concerned neigbhour that very night and alerted the patrol team. There is no way the police would engage in such act as shielding someone for murder, an innocent person was in trouble and the police went to his rescue,' DCOP Timbillah explained.

He added: 'it is very strange for someone who suffers mental problems to walk all the way from Suame, wielding a gun, to Atasemanso at such an ungodly hour.'

According to the Regional Police Commander, even though he shares the concerns of the family for the loss of their son, the police cannot be blamed for the incident because there was enough evidence to prove malice on the part of the deceased.

DCOP Timbillah argued that if the deceased was not mentally sound as being claimed by the family, he wondered how he (deceased) could point a gun at the security officer on post that night, seize keys of the car and attempt to drive away.

The Police Commander further opined that the police only returned fire as self defense after he (the deceased) fired at them and that if the deceased had no ill intention he would not have attempted to fire shots at the rescue team.

DCOP Timbillah, therefore, advised that if the aggrieved family doubts the authenticity of the police action, they could file an official petition to the Inspector General of Police (IGP) or the Police Intelligence and Professional Standard Bureau (PIPS) for an independent inquiry into the matter.

He said the police have nothing to hide, stressing that they would willingly appear before any independent investigative body to prove their case.