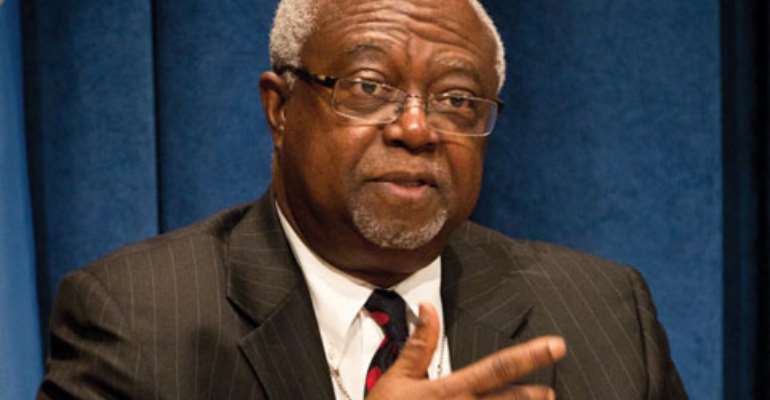 In 2003 the New Partnership for Africa's Development (NEPAD), the continental development plan, initiated the African Peer Review Mechanism (APRM). Since then 30 countries have joined the voluntary arrangement. How well has this process been working, and what lies ahead? A member of the APRM's Panel of Eminent Persons, Amos Sawyer — who was Liberia's interim president in 1990–94 and currently chairs that country's Governance Commission — spoke with Africa Renewal's managing editor, Ernest Harsch.

Africa Renewal Since the democratization wave of the 1990s there have been many different governance initiatives in Africa. What's unique about the Peer Review Mechanism? What does it add?

Amos Sawyer First, it is a self-assessment, done by the country itself, in an all-inclusive way: government, civil society, the business community. Second, it is a peer review. It is held by the African governments themselves. Peers from outside sit together with the leadership of the country. That engagement involves constructive criticism, illustrations of best practices. But it doesn't end there. A programme of action is formulated, and the head of state being reviewed has an obligation to come back to his colleagues every two years to report on the progress that has been made.

It is slow. It is not confrontational. But a country that does it right has windows opened for the international community to support its development programmes. It strengthens its systems of governance, because the very methodology compels countries to engage with their own constituencies.

AR You have spoken about the peer review as putting into practice the spirit of the Arusha Declaration of 1990.

AR Yes, I think so. The 1990 popular participation conference urged bringing out the human potential in the developmental process, that trade unions, farmers' groups, all should be involved in governance. We should move beyond thinking about “the government” and start thinking about “governance,” which admits the interaction of various constituencies of people. The peer review is giving some practical implementation to that.

AR You have people on the peer review Panel of Eminent Persons who come from civil society, but at the end of process the review goes to African heads of state for approval. Do you see any tension there?

AR Yes. In fact we are working on that. One of the issues suggested by civil society groups in Africa is that the review process at the level of the heads of state should either take place with the involvement of civil society or there should be a concurrent process where civil society would have its own take on the report. I wouldn't be surprised if in a few more years we see some changes.

AR In some countries civil society groups complained that those who were able to participate in the peer review were mainly government-approved.

AR You have a mixed bag of cases. There are some countries in which civil society is not only well organized, but has demanded and therefore achieved a presence in the political process. In other places civil societies are still fighting to get a seat at the table and organizing themselves to build their capabilities. In all of the reports where there is weak civil society input we note that very strongly. And in the programme of action we will note that civil society empowerment is a major project that should be undertaken.

AR How do you know the APRM is having an impact?
AR Sadly, we know all too soon when it is not working. At the 2006 review of Kenya, four or five critical issues were singled out in the report. Those came back to haunt us, with the electoral violence [in 2007–08]. Now, from the office of the president down to civil society, they all say that if they had followed the report they could have avoided many problems.

In South Africa we raised the issue of xenophobia. I was not a member of the panel, but a consultant in the preparation of that report. At first there was denial. At many sticking points the South African government felt that we were wrong. But the panel member who was in charge of the process stuck to the report and it went through. South Africa has now come around to the problem [of xenophobia], unfortunately after it blew up [in violence in 2008].

AR Thirty countries have acceded to the APRM, but only some have gone through a full review. What is the problem?

AR Thirty countries have acceded, 14 have completed. Another two are on the way and by January will be finished. Another, Tanzania, has invited the commission to come in, and that will be done. We are told that Gabon, the Republic of Congo and Liberia are preparing. So we still have quite a few to work on, at least 10 or so.

Now, that's still just 30 out of Africa's 54 states. So we have a lot of work to do with those that have not shown any interest at all. We encourage African leaders to join their colleagues. I think such peer pressure can be more powerful than many other pressures.

I think the idea of involving African leaders themselves in a transparent process of self-examination and peer review has some strong merits. It can produce significant results that are beneficial for Africa. We need to encourage this process.