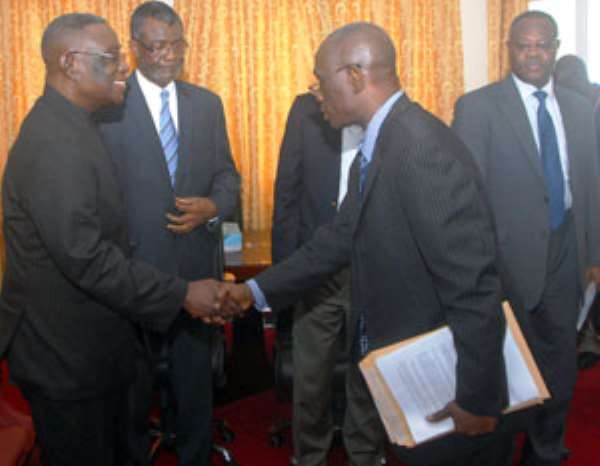 1.BACKGROUND
In or about July 2004, Ghana was awarded the right to host the 26 th Cup of African Nations (CAN) 2008 football tournament. Among other things, the Confederation of African Football (CAF) specified that the tournament should be held in at least four (4) separate stadia but not more than six (6) stadia should be used. Again, CAF specified that the stadia to be used for the 16-nation, 32-match tournament should have a minimum capacity of 20,000 for the group matches while those to be used for the opening match, semi-final matches and final match should have at least the capacity 40,000.

Based upon this, Government decided to rehabilitate the Accra (Ohene Djan) and Kumasi (Baba Yara) Sports stadia and to build two new stadia at Sekondi-Takoradi and Tamale.

Consequently, in January 2005, adverts were published in the newspapers (such an advert appeared in the Daily Graphic of Thursday, January 6, 2005) with the main headline 'EXPRESSION OF INTEREST' and a sub-headline 'PROVISION OF CONSULTING, CONTRACTING AND FINANACIAL SERVICES FOR CAN 2008 GHANA'. The advert was issued by CAN 2008 Ghana Local Organising Committee (LOC), on behalf of the Ministry of Education, Youth and Sports (MOEYS) and requested for suitably qualified firms and joint ventures for expression of interest for the consulting services, construction, supply of goods and related services (to be awarded on TURNKEY basis).

The task was required to cover the following, among others:

Other specific products and services areas including project investors/financiers.

Among other things, the advert stated specifically that the expression of interest should be limited to (a) Evidence of sourcing financial support for the project and (b) any other relevant information.

The advert also stated clearly that the 'Tendering will be governed by the rules and procedures of the Public Procurement Act, 2003 of the Republic of Ghana' and that '…only shortlisted applicants will be invited to submit technical and financial proposals '.

The deadline for the expression of interest was 'NOT LATER THAN THURSDAY, JANUARY 20, 2005.' Although not specifically stated in the advert, no limitation was placed as to whether it was a local tender or international. Consequently, non-Ghanaian registered firms also expressed interest and the subsequent actions of the Tender Committee showed that the process was an international one since non-Ghanaian companies also submitted bids/proposals.

(1)          At the close of the deadline and out of the number of companies which expressed interest, twelve were eventually invited to present proposals for the design, procurement, and construction of the stadia. The twelve companies who were shortlisted were:

Emsas Construction/Epiferm Ghana Limited;
British Engineering Services Group;
Ballast Nedam Ghana BV/Interbeton (They put in a Joint bid although initially each of them answered the Expression of interest independently);

E.H. Group & Associates;
Excelsior consortium Alliance; and
Aarun BIS Company Limited.
(4)          The proposals which were submitted by the deadline were evaluated on the following parameters;

offer proof of funding;
budget;
detailed drawings; and
programme of works
(5)          After considering the proposals along the parameters determined in 2(4) above, the following firms were determined substantially responsive and were therefore qualified for detailed evaluation:

The evidence shows that during the process of the tender, Vamed Engineering assigned its rights and responsibilities under the tender/bid to Waterville Holding (BVI) Ltd, per the Vamed Engineering Letter 01-07-2005 and the acceptance letter issued by Waterville Holdings (BVI) Limited acknowledging the Vamed letter and accepting the responsibilities and rights. Accordingly, Waterville assumed the role of Vamed and was the party with which the MOES dealt in all practical terms and has contract with, if any.

5. After the detailed evaluation of the bids, the Tender Committee recommended Vamed/mPowapak, Ballast Nedam/Interbeton, BES Group and Epiferm/EMSAS to be deemed to be financially responsive and for further negotiations pending the satisfaction of the remarks of the Financial Evaluation Committee made against each of them. The Financial Evaluation Committee comprised of Mr Lionel Van Lare Dossoo, then Deputy Governor of the Bank of Ghana, Mr Paul Asimenu, Director, Legal of the Ministry of Department of the Bank of Ghana and Ms. Yvonne Quansah of the Aid and Debt Management Division of MOFEP.

Dr Kwabena Duffuor and Betty Mould-Iddrisu
The Finance Evaluation Committee submitted a report on July 22, 2005 in which it declared the financial proposals of Vamed/mPowakpak as being the most responsive. The Committee however remarked that the processes to be met by both Government and Vamed will span between three and four months, thus a potential source of delay.

Additionally, Vamed required the setting up of a Special Purpose Company by Government to facilitate transaction. The committee therefore recommended that 'Vamed Engineering is contacted immediately for further discussions in view of the lengthy processes required to secure the MIGA Guarantee. The Committee also recommends an alternative option where the Government of Ghana considers the possibility of securing its own line of funding'.

The report of the Tender Evaluation Committee was passed on to the Central Tender Review Board (CTRB) for its concurrent approval.

6. Abrogation
In a letter dated 5 th August, 2005, the CTRB informed the Honourable Minister of Education & Sports of its concurrent approval of the CTRB. The CTRB however advised the Ministry to include documentation of all stages of the tendering process in subsequent tendering, particularly procurement Plan which the CTRB said would help in its forward planning. Evidence available shows that this was duly complied with.

After the CTRB conveyed its concurrent approval to the Ministry of Education and Sports (MOES), there is no definite written document as evidence of communication of the success of Vamed/mPowapak in the tender to it. However, in a letter dated 15 th of August, 2005 and addressed to Hon Osafo-Maafo, the then Hon Minister, MOES, mPowapak referred to two meetings at which mPowapak/Vamed was informed of its success. The first meeting according to the letter under reference, was held on Tuesday, 9 th August, 2005 and was attended by the Hon. Minister himself, his deputy, Hon. O.B. Amoah, the Chief Director of MOES, Mr Ato Asuman and representatives of mPowapak/Vamed in the person of Alfred Woyome. The second meeting referred to was supposed to have been held on Wednesday 10 th August, 2005 attended by Hon O.B. Amoah, the Deputy Minister of MOES, the Head of Procurement, MOES, and the Chief Director, Mr Ato Asuman.

Facts picked up from documents clearly indicate that the tender process was going on smoothly until Government intervened and abrogated the process.

There is further documentary evidence that in spite of the concern expressed in the letter under reference, the Embassy of Ghana in Beijing, by its letter dated 11 th August, 2005, sent further particulars of the Shanghai Construction Group to the Chairman of LOC, and that subsequently after the abrogation of the tender process, the Shanghai Construction Group was awarded contracts to undertake the construction of the Tamale and Sekondi stadia.

Mr Osafo-Maafo told Cabinet further that 'if on the other hand the recommendations arising out of the tender will be set aside, then we should marshal our forces and make a decision which we can defend nationally and internationally'.

In his letter of 22 nd August, 2005 however, Mr Osafo-Maafo, the then Hon Minster of Education and Sports, informed Vamed/mPowapak of the termination of the tender process, the reasons being the 'high financial commitments implied in the submissions, the inconclusive and the non-assuring nature of the financial submissions'.

Subsequent to this letter, Waterville, per the letter written by its lawyer, Colin Russell, dated 27 th August, 2006, protested against the termination, pointing out that the reasons given by MOES was not tenable and the termination illegal. He cited the Public Procurement Act to support Waterville's case.

Consequently, in MOU signed dated 30 th of November 2005, Waterville was given the right to commence rehabilitation works on the Kumasi, Accra and El Wak stadia. The MOU stated that a formal contract should be signed within 45 days of the date of the MOU. Subsequently, per its letter of 6 th February, 2006, MOES authorized Waterville to move to site pending the written contract which was eventually signed on 26 th April 20-6.

Documents studied so for indicate that these contracts were also terminated and Waterville put in a claim for a total amount of â‚¬21,569,946.71 , for actual work done and financial engineering . Government then paid an amount of â‚¬11,935,706.55 for unexplained reasons, failed to pay the difference of â‚¬9,634,240.16 . This amount was outstanding until the change of Administration in 2009, when Waterville, taking advantage of the dispute settlement clause of its contract with the Government went for mediation and was eventually awarded an amount of â‚¬25,000,000.00 to cover its outstanding amount and accumulated interest, among others. This amount was subsequently paid in 2010.

Alleged Official Support for Woyome's Claim
The evidence shows that on 4 th May, 2005, the MOFEP, in a letter signed by Hon Kwaku Agyeman-Manu, Deputy Minister, Vamed Engineering GmbH and Co. KG and Mr Alfred Woyome were introduced to three (3) banks, namely Raiffeisen Zentral Bank, Osterreich AG, Bank Austria Creditanstalt AG and Exim Bank, Washington DC. The banks were requested to assist Vamed and Mr Woyome 'to conclude the loan deal and a term sheet' presented to MOFEP for consideration. The letter however had a disclaimer that 'this ministry and Government of Ghana does not take any responsibility legal or otherwise for any deal, contractual or otherwise entered into by Mr Alfred Woyome, Vamed Engineering GmbH & Co. KG do not represent this Ministry nor the Government of Ghana in any capacity whatever'.

Further, there is documentary evident which supports the fact that on the 5 th of July, 2005, the MOES per its letter introduced mPowapak to The Department of Commerce, Washington DC as representatives of Vamed Engineering, and went ahead to confirm to the Department of Commerce that the expected date of completion of the bid process was by 15 th July, 2005, after which 'any firm which is awarded the contract and has shown proof of funding for the projects will conclude negotiations with the relevant Ministries after value for money audit has been conducted by an independent international body, for implementation on a supply contract basis.'

Give EC Benefit Of Doubt On 24-hour Results Promise – CDD-Gh...
43 minutes ago