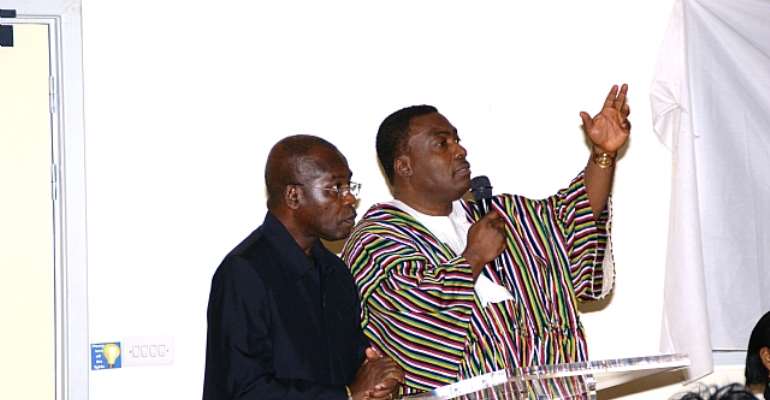 The NDC UK & Ireland Chapter last Saturday did kick-start the campaign for the 2012 general elections during the Chapter's first outreach programme in Milton Keynes.

The programme was used to launch a year-long campaign dubbed 'OPERATION VICTORY -2012'. The event attracted a large section of the NDC party faithful and sympathisers, including Branch members from Luton, Birmingham and Liverpool. The event was hosted by the Milton Keynes Branch of the Chapter and chaired by Mr Horace Nii Ankrah, the Chairman of the NDC UK & Ireland Chapter. Also in attendance was H.E. Prof. Kwaku Danso-Boafo, the Ghana High Commissioner to St James Court. In his opening remarks, Mr Ankrah called on members of the party and all social democrats to unite and rally behind H.E.President John Evans Atta Mills and NDC to use the year to campaign intensively and extensively on issues and achievements of the NDC government over the last three years. He said the 'Better Ghana Agenda' is our measure for victory in the December 2012 and appealed to all to make donations in any form to assist the party elections machinery to ensure 'cool' win for the NDC government under the able leadership of His Excellency, President John Evans Atta Mills.

The Chairman of the Milton Keynes Branch, Mr Peter Kumadi delivered a solidarity message on behalf of Milton Keynes members. He welcomed participants to the programme and the beautiful country-side Municipality of Milton Keynes and reiterated the founding principles of the party and its founder, former President H.E. Flt Lt (rtd) Jerry John Rawlings - transparency, probity and accountability. There were similar solidarity messages from Luton, Liverpool and Birmingham Branches.

His Excellency, Prof. Kwaku Danso-Boafo delivering his address as a special guest of honour at the event, took the opportunity to formally introduce Alhaji Abbas Mensah, a staunch Nkrumahist, who recently joined the NDC UK & Ireland Chapter. He stated that NDC as a party is made up of people from all walks of life and that conflicts are inevitable. He therefore admonished members to make every effort to patch up their differences at the earliest opportunity to minimise any negative impact on the party. He advised; 'we must rather expend our energies in telling the world, particularly the Ghanaian community , the numerous success stories of the NDC government under the caring leadership of H.E President J E Atta Mills because no one would tell it for us' . He went on to set the stage for Alhaji Abbas and with humour indicated that his role for the event was that of a pathfinder as John the Baptist.

Alhaji Abbas expressed his delight to be at home under the all-embracing Akatamanso and pledged to contribute to attaining the NDC objectives. He gave a detailed political history of Ghana and paid immense tribute to Osagyefo Dr Kwame Nkrumah, the father of Modern Ghana. He rebuffed a long standing hearsay that Dr J B Danquah had personally been instrumental in the invitation of Osagyefo Dr Nkrumah to then Gold Coast to administer the United Gold Coast Convention (UGCC) in November 1947. He said that Dr Arko Adjei, a fellow alumnus of Lincoln University in the USA had recommended him (Osagyefo) to Mr Paa Grant , the founder of UGCC and was therefore detailed to Great Britain to arrange for Osagyefo's return to lead the then Gold Coast to independence and set in motion a united Africa aspiration.

Also in attendance was Nana Sam Pee Yalley, a Barrister and Public Interest Advocate and a member of the NDC Communications Team at the National Secretariat. Nana Pee Yalley assured participants of the government and the party's determinations to find timely solutions to all unwarranted distractions being perpetuated by the main opposition party NPP. Nana Pee Yalley urged all to brace for action for massive victory for the Party come December 7. His message was best carried across in the wisdom captured in the great work of W.B. Yeats; The Second Coming - which was made popular by the renowned African Writer, Chinua Achebe. Surely, the political events of recent times in the country are mere anarchy let loose on the nation by the opposition NPP who are refusing to cooperate with statutory bodies on the very allegations whined about in the mass media. Nana Pee Yalley, therefore, advised members present to identify with and propagate the achievements of the party under the wise guidance of HE President Atta Mills to consolidate the NDC victory in the coming general elections. He said the NDC as a party needs to set the agenda and identify with the mood of the country at all times and not leave it to the chatterbox opposition party to do so.

The occasion was also used to recognise the good work of the past chairpersons of the Chapter including Late Mr Torto, the first Chairman, Messrs Ekow Mends and Alex Segbefia. On behalf of others, Mr Mends thanked the Chapter for appreciation of their contribution and whipped up members of NDC and all who believe in the good work of President Atta Mills to use the power of the tongue to deliver the Good News of the party. He said the NDC in government has deepened democracy and brought peace and development to the country and called on all to rally behind the government to help retain power during the coming general elections.

Further Goodwill messages were delivered by the women and youth wings of the Chapter.

The Deputy Party Organiser, Mr Dominic Mbang, outlined series of events and activities to take place throughout the year which would form part of the year's electioneering campaign. He invited members and sympathisers of the party to join actively in all the programmes to culminate in the victory stroll at the close of 2012.

From Victory to victory The Great NDC marches on!!!

Rawlings came through for me in my difficult moments as Pres...
58 minutes ago