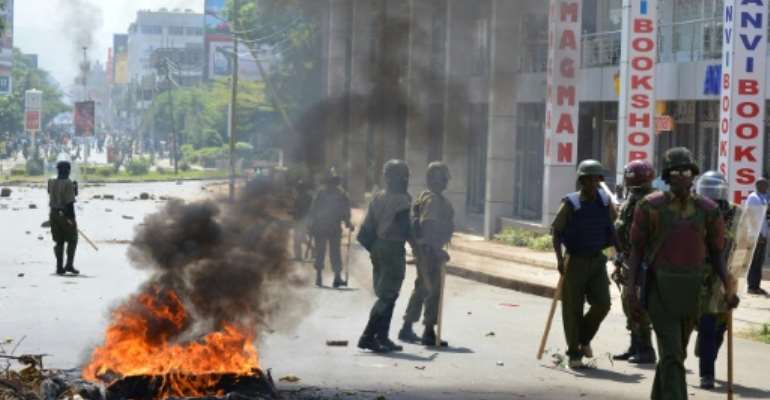 Kenya's opposition CORD alliance has been staging weekly protests every Monday but one since late April to demand a shake-up of the country's electoral commission ahead of presidential elections in August next year.

Protests took place in several towns but in Kisumu, an opposition stronghold in western Kenya, police opened fire before using tear gas and water cannon to quell the protests as news of the deaths spread.

A bullet wound was visible on one corpse, laid outside a hospital morgue by protesters who said he was hit by police fire.

Protesters blocked a road with the other body as they clashed with police.

"We cannot have police shooting people every other time they are exercising their rights, this man has been shot dead while protesting," said protester Michael Omondi.

Word of the shootings fuelled heavy clashes in the centre of Kisumu and the working class district of Kondele. There were widespread scenes of looting and two supermarkets were destroyed.

At least three people died in similar protests in western Kenya on May 23, two of them when anti-riot police opened fire in Siaya, while a third fatality, according to police, resulted from a fall while fleeing from tear gas in Kisumu.

"Last time they shot someone dead and claimed he suffered injuries as he was falling down," said Kisumu resident Charles Otieno.

"What will they say today after the death of this man because he was clearly shot?" he added.

The CORD protests began in April to force a change of leadership at the country's Independent Electoral and Boundaries Commission (IEBC) ahead of the 2017 presidential poll.

The protests were suspended on Monday last week to allow for talks with the government but resumed on Monday.

Nairobi's police chief Japheth Koome warned during the weekend that police were prepared to use lethal force if necessary.

"No demonstration. That's the message. If you have nothing else to do, sleep. It will not be allowed," Koome told the BBC.

"Please, if you value your life, don't attempt it that way. You will be dealt with firmly."

But the High Court said early Monday that the protest was deemed legal.

Soon after the ruling, demonstrators gathered at Nairobi's central Uhuru, or Freedom, Park and started marching towards the office of the national electoral commission.

CORD leader Raila Odinga has blamed the commission for his defeat in 2013 by President Uhuru Kenyatta, led the march to the commission's office.

Next year's election is shaping up as a replay of 2013, with 71-year-old Odinga again aiming to unseat Kenyatta, 54.

The 2013 election nonetheless passed off peacefully, in contrast to the country's disputed 2007 elections which degenerated into fierce inter-ethnic violence.

More than 1,100 people were killed in 2007 after Odinga's supporters challenged his defeat by Mwai Kibaki.