When the Woyomes finance political parties in Ghana… 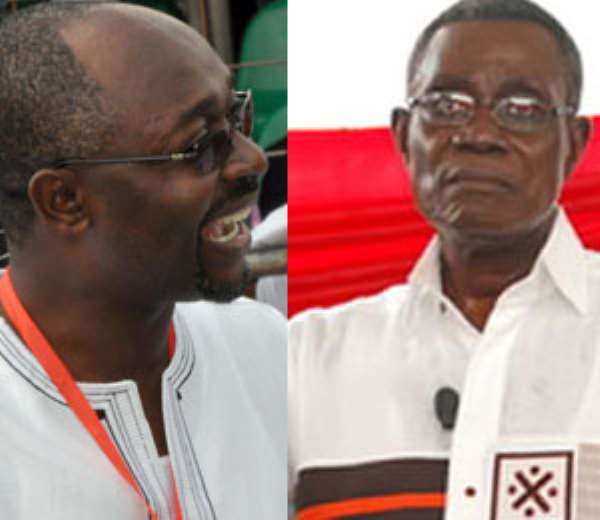 Until the scandal aroused by the payment of the judgement debt to Alfred Agbesi Woyome, a private businessman and a prominent financier of the governing NDC, is properly investigated and concluded, we will continue to hammer on it as part of our efforts to examine the factors that endanger our national life.

The controversy it has provoked continues to raise very serious questions, one of which is about the financing of the various political parties by individuals such as this Woyome.

Why do they choose to spend so much of their private wealth on financing the political parties? Do they do so just because they are philanthropic or in anticipation of a windfall? They give cause for alarm.

Bearing in mind how expensive running a political party is, it is undeniable that individual party members who have the capacity to finance the party's activities will do so to keep the party afloat. Such is the case of Woyome and many others on whose shoulders the various political parties depend to survive the whirligig of Ghanaian politics. But isn't there an ulterior motive for such financing?

Some parties are even known to have received contributions from foreigners, contrary to the regulations guiding the political parties' activities. What do you think is the reward for such foreign donors?

The formation of the Progressive People's Party by Paa Kwesi Nduom is a clear example of how the birth of a political party connotes many things bordering on financing. As of now, we know he is solely responsible for maintaining the party. His reward is likely to be that he will be chosen as the Party's Presidential Candidate, something he wasn't going to get easily were he to remain in the CPP. We know how much financial support he gave to the CPP prior to quitting to form his own.

The PNC has Dr. Edward Mahama as a major financier. All the other mushroom parties have theirs too. Even in financing their own political activities at the constituency level, our MPs are complaining of being broke already, which should tell us how expensive party business is in Ghana—and why after draining their pockets, the successful politicians quickly begin looking for loopholes in the system to exploit so as to recoup their expenditure and to stash something away for another occasion.

The NDC and NPP are better endowed with moneyed people whose largesse has remained their livewire over the years. How many times haven't we heard of some of those major financiers being exposed for indulging in dubious deals? They won't spend their money on a political party for nothing. It is a matter of one good turn deserving another, or what we say in Ghana, “hand go, hand come.”

In a country where state funding for the political parties is impossible, this role being played by the individual financiers in the various parties may be regarded as commendable. But is it really so? Or are they being smart enough to rob Peter (the national coffers) to pay Paul (their political parties and themselves)? The Woyome case seems to answer this latter question.

Yes, we appreciate such efforts as part of the input needed to sustain political party activism. But one aspect that Ghanaians seem to neglect is the fact that those financiers are not “Santa Clauses” to give their lot for party work free-of-charge. I know it for a fact that there is a tacit quid pro quo agreement between these financiers and their parties, especially those capable of winning elections to be in power. Being in power means having access to the vault. We can all imagine the implications and consequences.

No one is arguing against the financing of political parties by an individual well-placed businessman or woman nor is it being suggested that financing a political party from one's personal coffers is bad. That's not the issue. What is being argued here is simple: those who take up the financing of their preferred political parties don't do so just for its own sake. Don't expend resources on the parties just because they have too much money and too little to do; nor do they do so without an ulterior motive. They do so because they know how to recoup a million-fold whatever bread they cast upon the waters.

I am given to understand that just as those who donate hordes of money to the church are given special recognition by being placed on the dais or honoured with the coziest frontline seat to be showered with praises, so is it for the financiers of the political parties. They are held in high esteem and a numbing awe. They can go anywhere within the ranks of the parties without being frustrated in any way. Even if their party is in power, they can have unimpeded access to the President and call the shorts to profit from.

Their words are the commands that the poor party hierarchy and ordinary members obey without question. Such financiers wield so much influence in the party that anybody who dares disobey their command or even does anything likely to be considered as an affront to their integrity and standing in the party must be prepared for the wrath of everybody who knows that financier's worth to the party.

We are talking about those well-placed financiers using their material contributions as the means to wield much influence in the party as the real power brokers. Their money is the wheel on which the party rides. In all that they do as party financiers, no one questions anything about the source of their wealth. Financiers of Woyome's type wield the kind of clout that can make or mar an ambitious but self-assertive party member's political career, especially if both ever cross swords at any time in the workings of the party.

It is common knowledge that those who do the yeoman's job for the parties are not the moneyed financiers. They are the small office holders and the foot-soldiers. They need the largesse of the financiers to survive and will do anything to secure that largesse. They know better not to do anything untoward. Otherwise, they can't get their bread buttered. What we've seen happening in the NDC as a result of the agitations by the foot-soldiers is all about somebody's bread not being buttered.

In our peculiar Ghanaian situation, the party financiers often indulge in dangerous speculation, spending money in the hope that if their party wins the elections and the floodgates to the national coffers are opened, there will be much harvesting to do. I can only imagine how such characters take advantage of their political connections to recoup whatever they might have spent financing their parties' activities. They are all over the place and must be known for what they are.

For as long as our political system harbours such shady characters, we shouldn't expect anybody elected into office by virtue of his party's being financed by such money bags to turn round to clamp down on any corrupt practice indulged in for the benefit of such a financier.

That seems to be the crux of the matter in this Woyome case. So far, no one in authority in the NDC has come out to openly support any action against Woyome. Nor have the party's leaders themselves batted an eyelid. They won't do so because in one way or the other, they know what Woyome means to them and their party's coffers. Beyond that knowledge, they stand equally culpable for their role in the scandal.

Being complicit in the perpetration of the fraudulent acts from which they benefit, they fear being exposed if they push the culprit to the wall. They won't press the button because the bomb will explode and cause much damage to them as accomplices. Neither do they feel bothered that the filth created by this Woyome scandal has already rubbed off on their party and stained its reputation. They will choose to look elsewhere for reasons to blame any future electoral misfortune on their political opponents' vile propaganda.

Those in the government (like Alex Segbefia, the Deputy Chief of Staff) who have rushed to Woyome's defence are shameless opportunists to be identified and routed from the corridors of power. They are those who are making it difficult for genuine efforts to be made to rid our society of bribery and corruption.

The political parties must find better means to finance their activities and stop relying on the Woyomes who consider their financing role as an opportunity to look far afield to be able to fulfill such obligations. Is it too much of a burden to regulate financial contributions made by individuals to the parties? Or to streamline party financing by individuals not to exceed a fixed quota and to make it a punishable offence for anybody who violates the regulation?

Measures to control party financing by individuals must be put in place. Apart from their being used to curb improprieties, such measures can help us look for alternative means for party financing that will not tie the parties to the apron strings of the biggest financiers who turn round to use their political connections to make it “big time.” We want our democracy to grow and it can do so only if we implement measures to rid it of filth. Let's start now before the Woyomes outmanouevre and lead us into danger!

• E-mail: [email protected]
• Join me on Facebook at: http://www.facebook.com/mjkbokor
• Get a copy of my novel, The Last Laugh (PublishAmerica.com, April 2009)