Mozambican trio get 25 years in S.Africa for rhino poaching 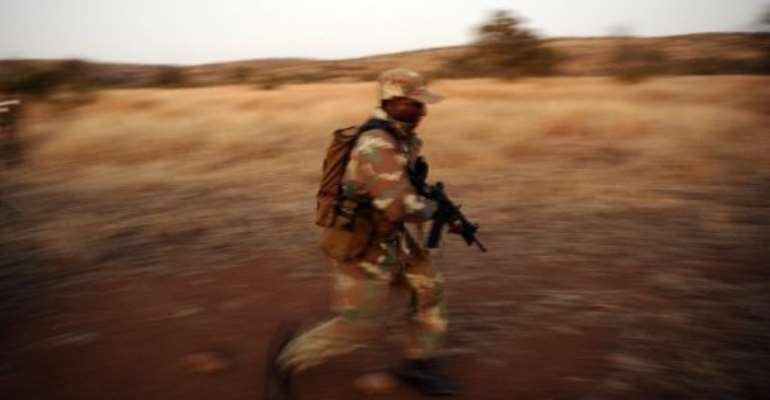 A soldier participates in an exercise against rhino poachers in Kruger National Park in 2011. By Stephane de Sakutin (AFP/File)

"We welcome the decision which is the harshest sentence in the country" for rhino poaching, Thakhuli told AFP.

The Phalaborwa Regional Court in northern province Limpopo convicted Aselmo Baloyi, Jawaki Nkuna and Ismael Baloyi of poaching and the possession of illegal firearms. They had an AK47 and a shotgun among others.

"They pleaded guilty. They were caught with two freshly-cut horns," said Thakhuli.

A fourth man who had also been arrested died when he tried to escape from police custody.

Thakhuli did not give further details about the poachers' identities.

The sentence aims to scare off other poachers as authorities try to curb the massive killing of the animals, especially in the world-famous Kruger Park which borders Mozambique.

Last year a record 450 rhinos were poached in South Africa, a crushing blow for a country home to more than 70 percent of the animal's global population.

The dramatic spike in rhino killings -- up from 13 in 2007 -- feeds the Asian traditional medicine market, despite scientific evidence that the horns have no medicinal value. They are made of the same substance as human fingernails.

The increase is driven by highly organised syndicates who deploy shooters with night-vision goggles, high-powered rifles and sometimes even helicopters to make their kills.