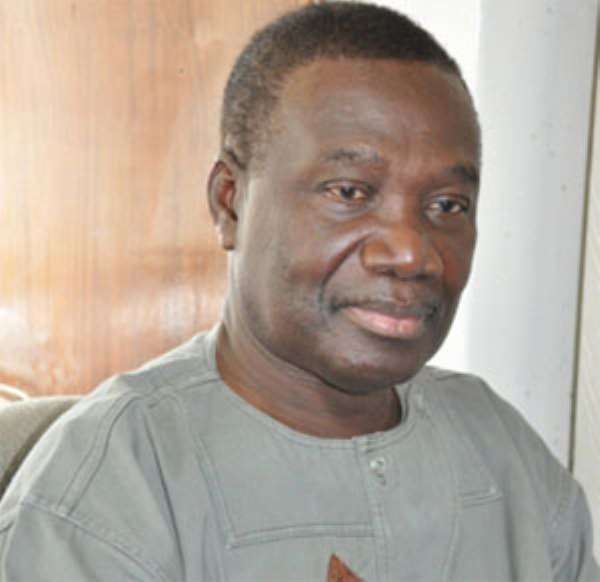 The woes of the Electricity Company of Ghana (ECG) continue to deepen as new revelations have unfolded on how the board, led by Dr Kwabena Osafo, blew huge sums of money as sitting allowances.

The board, which was expected to supervise the company's management and check it against the perpetration of any financial malfeasance, could not stand the temptation of excessive spending and ended up being dragged into it.

Investigations conducted over a period of eight months by Crusading Guide's reporter, Anas Aremeyaw Anas, revealed that in all, a total of GH¢373,871.60, equivalent to $249,247.73, was paid to members of the ECG board between January and November 2011.

The three top earners (Kwabena Adjei Bambaata, Stephen Sumani Nayina, and Bernard Allotey Jacob), according to the report, were able to earn that much because they live outside Accra for which reason their transport and accommodation fees were factored into the payments.  Mr Gyampo's figure comprises two-month earnings since he acted as Managing Director of ECG after his predecessor left.

'If these amounts are paid to leaders of the company at policy level; it is within our right as Ghanaians to demand more from the ECG board,' an insider at ECG insisted.

When reached for comments, the Public Relations Manager of ECG, Gloria Dua  Sakyi, told CITY& BUSINESS GUIDE : 'I cannot say whether the board members are entitled to the monies or not but they were appointed by the President in consultation with the Council of State. They are our bosses and we work under them so I cannot comment on the issue.'

But the Director of Customer Services at ECG, Dr N. K. Smart Yeboah, recently told Joy FM , an Accra-based radio station that he was scandalised, embarrassed and humiliated by the sheer scale of corruption and inefficiencies at ECG.

Meanwhile, a source at the Public Utilities Regulatory Commission (PURC), the regulator of the Ghanaian utility sector, told this paper yesterday the allowances received by the ECG board members were meager, compared to the amount paid to their counterparts at other public institutions such as the National Petroleum Authority (NPA).

The shocking investigations and revelations by Anas showed that different sums of fees were paid out to board members monthly, noting that the monies were paid net-of-tax i.e. either by cash or cheque. But in their case, the ECG board members preferred cash.

The fixed monthly board fees as at January 2011 was pegged at GH¢750 and GH¢975 for the board members and the board chairman respectively.

The amount, according to the report, was increased by GH¢225 from February until the reconstitution of the board was completed in November 2011.

In addition to the afore-stated, all board members resident outside Accra had their transport to and from their regions catered for by the ECG, which had performed badly over the years due to poor management and a laissez-faire attitude.

The calculation of how much a member took as transport fares was 0.60 pesewas and increased to 0.70 pesewas based on every kilometre travelled.

For instance, the distance from Cape-Coast to Accra for a board member, Bernard Allotey Jacobs, was 288 kilometres, which translated into GH¢202.  From Kumasi, another board member, Kwabena Adjei Bambaata, was paid for a trip of 540 kilometres, adding up to GH¢378.  Stephen Sumani Nayina also received GH¢921 based on a kilometric calculation of 1,316 kilometres by 0.70 pesewas.

Since the above-listed board members lived outside Accra, they were also paid accommodation fees of GH¢300 each per night on board duties.  With regard to per diems for workshops, board members and the chairman were paid GH¢375 and GH¢500 respectively, according to the investigation.  Another facility paid exclusively to the board chairman since July 2011 was mobile phone units of GH¢200 per month.

The investigation also compiled the list of the highest earning board member per month from January to November 2011.  In January, it was revealed that Allotey Jacobs managed to top the list, having collected monies amounting to GH¢5,343 before being paid a supplementary fee of GH¢3,865.  In total, Allotey Jacobs was paid GH¢9,208 for the month of January.

In February, Allotey Jacobs was upstaged by board chairman, Kwaku Osafo, whose GH¢8,023 stood above his other colleagues.  With GH¢8,172 as his total for the month of March, Kwabena Adjei Bamtaaba clinched the top earner status.  In April, Stephen Sumani Nayina entered the ECG board but smashed all records of previous months and set a new record with GH¢9,416 in just 30 days as part time service to Ghana. In May, Allotey Jacobs staged a come back to the top with GH¢6,890 payment.

The eight-month investigation conducted by the Crusading Guide reporter further revealed that before the board was reconstituted in November 2011, Stephen Sumani Nayina was the 'star' performer, receiving the highest money from July through November 2011.  He was paid GH¢8,736 for the month of June, before signing for GH¢9,282, GH¢9,296 and GH¢9,256 for the months of July, August and September.

By Felix Dela Klutse with files from Crusading Guide