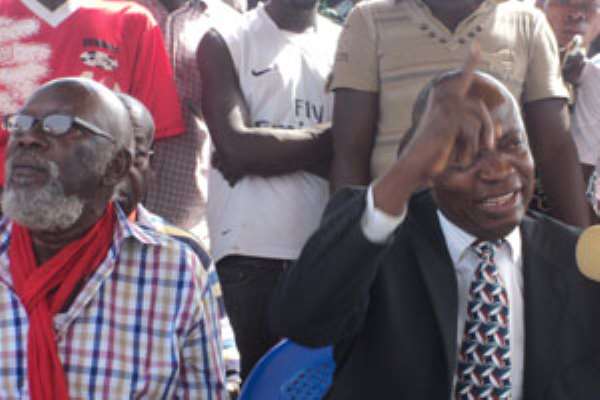 Members of the Dome Onormrokor-Adain family, original owners of the vast land which has become the subject of a raging controversy between the Ghana Atomic Energy Commission (GAEC) and Anaina International, have decried the continuous silence of government over the rumpus.

At a press conference in Accra yesterday, Prof. Frank Norvor, who holds power of attorney for the family and doubles as Chairman of Anaina International, yesterday accused Director-General of GAEC, Prof. Edward Akaho and the Lands Commission of selling portions of the land in question to private developers, a claim the Atomic Energy boss has denied and treated with contempt.

Prof. Norvor could not fathom why out of the 630 acres of land released back to them by government, only 800 plots (the equivalent of 200 acres) had been officially given to them, with the remaining still in the hands of the Commission.

The Prof Akaho and 33 or so of his security men were recently arrested and charged for arson after not only razing down the office building of Anaina International but also setting their properties, including a tractor and another van, in flames for supposedly encroaching on their lands.

Prof. Norvor provided documentary proof to back his claim that the land in question did belong to the Onamrokor-Adain family, saying the acquisition had been reversed and the land reverted to them by government as far back as 2000.

This was contained in a document dated August 26, 2011, signed by one Paul Dzadey of the Land Registration Division of the Lands Commission which was in response to a series of search made on the said land.

Indications are that the land in question had earlier been sold to Marina Hotel Limited.

This is evident in a settlement arranged between the hotel and the Commission in which a cost of GH¢200 was awarded against GAEC by an Accra High court.

Prof. Norvor described the actions of Prof. Akaho as criminal.

The GAEC boss has however denied owning or selling any land or house in the enclave.

Prof. Akaho said he could not do anything untoward at the place, knowing very much the consequences of any such actions or inaction.

Though he did not dispute the fact that the Onamrokor-Adain family could own a portion of the land in question, he said the Executive Instrument that was used in the acquisition of the land from the family and many other families needed to be amended to indicate which portion belonged to them.

'If you have 400.5 acres, then the Executive Instrument must be amended so that I know where exactly the land is for the Atomic Energy; you just start clearing and clearing very close to our reactor without my concern when you don't even have an environmental impact assessment permit,' he noted.

Prof Akaho said, 'The Lands Commission is even saying that they did not plot that portion of the land for you.'

He expressed doubts about the family's claim over the disputed land, daring his accusers including Prof. Norvor, who accused him in the selling of GAEC lands to the public, to go to court to prove their case and stop deceiving members of the public.