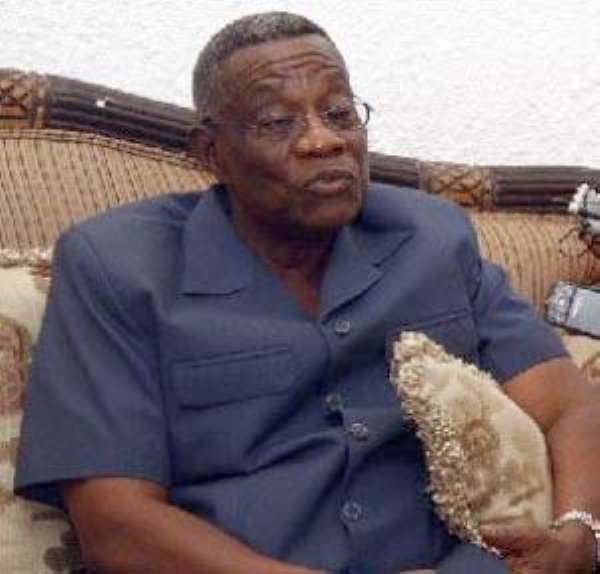 It is not for nothing that the media is termed as the fourth estate of realm, for its watchdog role, among other things, to keep the government accountable to the people.

Judging from what transpired when the president played a host to some journalists and editors at the recent media encounter at the Castle, then the media has failed to discharge its traditional responsibility of ensuring good governance (accountability, probity and transparency) and democracy.

In other words, journalists and editors, who appeared on the show failed, and failed ignominiously, to pepper the president questions on a wide range of national issues bothering the minds of Ghanaians.

One criticism against journalists and editors at the media interaction is their ability to do a perspicacious analysis of the different issues of national concerns but they only took interest in issues bordering on triviality, controversies and scandals. It can be said, however, that not all the journalists and editors failed to ask the bread and butter issues affecting our people. At least, some of them lived up to our expectations. I do not want to mention names but as they say, one bad nut spoils a whole lot.

Sad to relate, out of 27 questions that were asked, dozens of them centered on triviality. Absolutely off tangent! To put it bluntly, journalists and editors were lazy to the bone and interested only in ''item13'' and "soli" after the end of the programme, and so they blew off the golden opportunity!

It apparently never crossed their minds for a second that as much as Ghanaians would judge the president on the basis of his responses to the questions, they would also judge the media practitioners on the issues raised and questions fired at the president. Perhaps, journalists thought the searchlight would be on the president alone, forgetting that Ghanaians would take keen interest in the kind of questions asked, particularly being conscious of the fact that the media have a vital role to play in the democratic governance of the country. Thus, keeping the government on its toes, informing the people to make right choices is the sacred duty of every journalist, and for that matter, media practitioner. Journalists went to the Castle; journalists asked questions and yet failed their mission.

Unfortunately, in the heat of the programme, instead of listening with rapt attention and taking notes of the president's responses in order to grill him, some journalist folks were only conversing and giggling as if nothing was at stake. From their expressions, they were not prepared to ask questions and as soon as the president responded to the last question, they heaved a sigh of relief. Broad smiles were boldly written on their faces as they knew the long awaited time had beckoned; time to enjoy sumptuous meals and drinks.

Not too distant past, journalists were beamed fighting among themselves over meals. It was a shame, pure and simple! In some cases, they asked for speech provided there was one, to make their stories. In other cases, after the food had taken better part of them, they ended up putting wrong construction on what had been said.

With the media encounter coming to an end, journalists could be seen jostling with each other wanting to be noticed by the power-that-be. One journalist after the other elbowed their way through a motley crowd of press men and women, desperately trying to shake hands with the president. Of course, it is a privilege to shake hands with the sitting president of the land. And this must be done in an orderly manner! It is said that good works of person open doors for him or her and journalists are of no exception. That is why, when the president Obama visited the motherland, he acknowledged the good works of the country's ace investigative journalist-Anas Amereyaw Anas-in his address to the nation. What is remarkably clear is that Anas did not run after the American president wanting to shake hands with him. It was the former who requested the latter to pay him a visit in the white house.

It is now obvious from the number of questions that journalists took for granted the bread and butter issues of the overwhelming majority of Ghanaians. If not, how could one explain, and convincingly so, the way and manner journalists messed up things and expect Ghanaians whose voice they vowed to defend, even at the point of death to cheer them up? No way! No wonder, journalists continue to rank very low in public esteem.

To me, journalists and editors failed to ask the relevant questions not necessarily because the president was on top of issues but because they failed to research into issues they intended to pepper the president. The impression I got was that the president prepared very well for the encounter and did not leave anything to chances. Nobody can fault the president for that.

If the journalists and editors had done their homework well, the president would have found it difficult to response to some of questions .As it were, the prez sailed through without a sweat. I vividly recall what my journalism lecturer, a veteran and respected journalist, Mr. Andrew Awuni, told us in journalism class that journalism thrives on research-crucial aspect of the profession. It is very pathetic that in this day and age where a button click on the computer gives lots of information on a wide range of topics, journalists and editors could not do a better job and toy with such an important programme as the media encounter with the president.

One thing is clear; not all Ghanaians could be invited to the Castle to ask the president questions. That is why, by virtue of their privileged positions, they were to represent 24 million Ghanaians. Thus, allowing that opportunity to slip through their hands is most unfortunate. And perhaps this must not be allowed to happen again. Never again!

Whichever way one may look at it, such presidential media interaction is one sure way out of several avenues of deepening multi party democracy and good governance. This must be encouraged by all and sundry. It must be maintained, sustained and even improved upon. Thus, there are suggestions that the media encounter be replicated in all the 10 regions, which means bringing governance to the doorstep of the people.

I am not in anyway suggesting that the president answered all 27 questions convincingly and rightly so. Not in a position to grade the prez on the performance of the media encounter, I leave that judgement to the good people of Ghana.

By George Oko Mensah is a young budding journalist
Okomensah.blogspot.com

More Feature Article
Modern Ghana Links
Bright Philip Donkor: Peace is Ghana’s oxygen
The Beauty Of A Woman By Femi Fani-Kayode
The Wind of Dumsor Is Not Blowing Back Anytime Soon, Comrade Adjaho
Jab Me If You Can: How Political Endorsements Defeat Vaccinations
The Final Push to Victory 2020
Islamic separatism and its treasonable impact on Nigeria
Searching for Mahama
Fructifying the peace pact
Nigel Gaisie’s election prophesy and a win for Mahama is just a lottery: ignore them with contempt
Dossiers Quotes Coronavirus
TOP STORIES