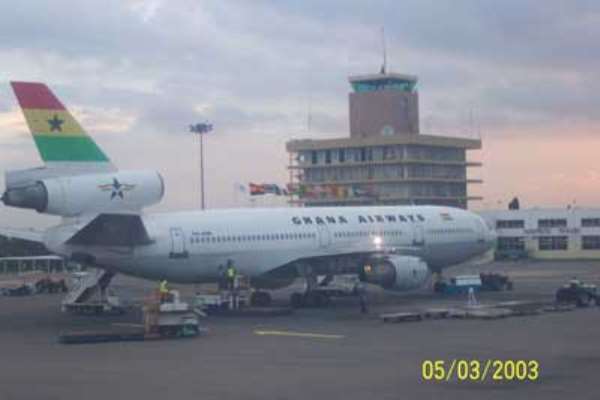 The debate as to what to do with the beleaguered national airline, Ghana Airways (Ghanair), rages on. To sell or not to sell, is the question facing the country in a HIPC situation?

Chronicle's investigations into the problems of the airline has revealed that Ghana Airways pays about $300,000 a week to Airbus to lease an aircraft for it's North American operations.

Ghana Airways owes its creditors about $146 million, having paid $20 million last year. Ghanair is also said to owe Alitalia $22 million and the latter is demanding a cash payment of $5 million before the two DC 10 aircraft (9G-ANA and 9GANC) belonging to Ghanair that was seized in Italy would be released. Meanwhile the DC10 9G-ANB, which is the only operating aircraft, would be sent to Italy on July 17 for maintenance works and might also be impounded by Alitalia.

The Chronicle has been sampling views on the issues and can report that the former Minister of Roads and Transport, Mr. Edward Salia, has said that liquidation of Ghana Airways should be the last resort after all other strategies like restructuring and divestiture had failed. "Although Ghanair owes debtors about $146 million, I believe there are other ways to solve the problems without resorting to liquidation," he explained.

He said supporters of liquidation should also look at the situation from a nationalistic point of view because Ghanair serves as the pride of the nation. "Although some African countries are without a national, airline it does not connote that Ghana should follow suit. The liquidation of Ghanair depends solely on the decision by the government of the day," he added.

Mr. Salia suggested that the government should either look for a strategic investor to take over or put more money into the airline to make the debt bearable. He also called for attitudinal change of the staff and management of Ghanair for the better.

Some aviation experts however suggest that the government should not continue to pump money into the distressed airline because even neighbouring oil-rich Nigeria has allowed her airline to be liquidated.

They said that the state cannot afford to spend $900,000 a week for Ghana Airways leases for three aircraft ($3.6 million a month). The airline now operates its North America, Europe and the West Coast of Africa routes by leased aircraft.

The experts explained that the liquidation of the airline should be considered, based on the fact that liquidity threats by debtors of the company had increased and the depletion of the company's fleet and other assets is on the ascendancy. They noted that the fleet of aircraft the company is operating is old and fuel-consuming.

The experts who wanted to remain anonymous stated that when Air Afrique was engulfed with about $260 million debt, the airline was liquidated and that "the same must be done to Ghana Airways".

The experts expressed grave concern about the way management had locked up their own ground handling equipment while they paid $200,000 a month to AFGO for the same, thereby losing lots of money.

Speaking on divine intervention and how it would work, the new chief executive officer of the airline, Mr. Philip Owusu, said on an Accra FM station, JOY FM, that he still believes God would answer their prayers although the going seems to be tough.

He noted that sometimes operating a leased aircraft is cheaper. But Mr. Kwame Osei Prempeh thinks otherwise because in the aviation industry, the seriousness of the top management, middle management and the staff is what would make a difference. Heaven help those who help themselves.

In the case of Nigeria, Mr. Gerry Gana, the information minister announced in May that the debt profile, liquidation threats by debtors, the depletion of its fleet and other assets had forced the government to liquidate the Nigeria Airways.

It had been revealed that Nigeria Airways was laden with a $60 million debt and had already laid off about 1,000 of its staff in the period leading to the liquidation.

Things moved from the frying pan into the fire for the Nigerian airline when it tried desperately to claw back its customers. Passengers bound for London and New York were stranded at the Murtala Mohamed Airport, in Lagos, for weeks due to lack of aircraft.

Relating the Nigerian experience to that of Ghana Airways, the experts concluded that Ghana Airways should have been liquidated a long time ago for a new company to be formed.

Meanwhile unconfirmed reports indicate that the talks between the government and British Midland International to take over the management of Ghana Airways have broken down.

Chronicle gathered that there were disagreements over who would take over the huge debt of the airline. The inauguration of the new board, which was to take place last two weeks, was called off.

Should the general public look forward for a liquidated airline or a new vibrant one?