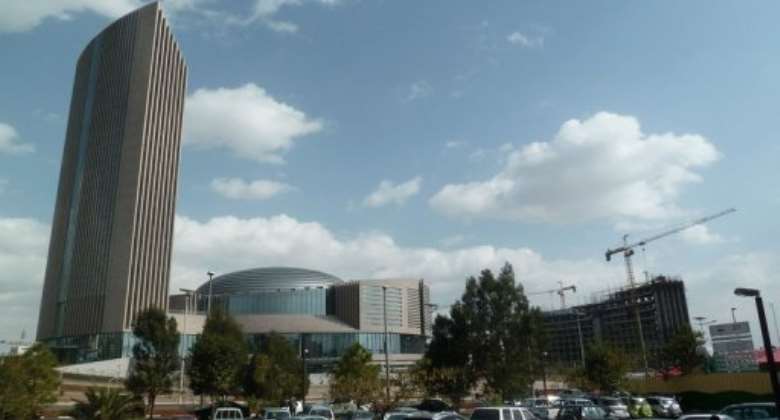 The AU headquarters was built and fully funded by the Chinese government at a cost of $200 million. By Jenny Vaughan (AFP/File)

Once seen as strictly interested in extracting raw resources and investing in infrastructure, China has interests on the continent that are increasingly shifting to investing in institutions and governments, experts say.

"The building of the AU secretariat offsets that in a very dramatic fashion," he added.

Construction of the 99.9 metre-tall building was wholly funded by the Chinese government at a cost of $200 million. Even the furnishings were paid for by the Asian powerhouse, and most of the construction material was imported from China.

The sleek edifice -- Addis Ababa's tallest -- will host the African Union summit which gathers African heads of state this week.

The centre is set to be inaugurated on Saturday by Jia Qinglin, chairman of China's political advisory body the People's Political Consultative Conference.

The building symbolizes China's major stake in Africa -- bilateral trade between the Asian nation and the continent reached over $120 billion in 2011, a jump from less than $20 billion a decade earlier.

But there has been a surge in investment in the past 15 years. Until recently, it focused mainly on bilateral relations. The new building suggests a push to foment multilateral links.

According to Vines, it is in China's best business interest to push for stability, especially in the wake of the Arab Spring which saw a collapse of governments across North Africa.

"It's a recalibration of how China sees Africa. I think the Arab Spring, in particular Libya, wasn't anticipated by China," he told AFP from London.

It is also a strategic move on the part of the AU to look outside of Africa and Europe for partnerships.

The death of Libyan leader Moamer Kadhafi has meant the loss of major funding for the often short-staffed pan-African bloc.

And China's investment in the AU stretches beyond the construction of the glimmering new AU building. Last December, China pledged $4.5 million to the AU's mission in Somalia (AMISOM) to fight Al-Qaeda-linked Shebab insurgents.

China is also a major contributor to United Nations peacekeeping missions in Somalia, Burundi and Sudan according to UK-based civil society group Saferworld.

China's ambassador to Ethiopia and the AU, Xie Xiaoyan, recently said his government's relationship with the AU serves as a central part of the China-Africa strategic partnership.

That partnership was formalized in 2001 with the launch of the Forum on China-Africa Cooperation, which convenes every three years. At the last gathering in 2009, China pledged $10 billion in loans to Africa.

But China views the AU as relatively toothless, according to political science professor at Hong Kong Baptist University Jean-Pierre Cabestan.

Construction of the new headquarters kicked off in January 2009, and a team of up to 1,200 Chinese and Ethiopian workers laboured around the clock in two or three shifts to finish it on schedule.

The site boasts three conference centres, a helipad and office space for 700 people. A bronze statue of pan-African leader Kwame Nkrumah, former president of Ghana, is slated to be unveiled this week.

"It's a testimony that this relationship will continue in the future," he said.

But that bond will depend largely on diplomatic relations between China and Africa, not simply on Chinese-built infrastructure, according to Vines.

"In 10 year's time, will there be a fuzzy warm feeling that China built this building? I'm not sure. It will be more about up-to-date relationships and Chinese diplomacy in Addis," he said.