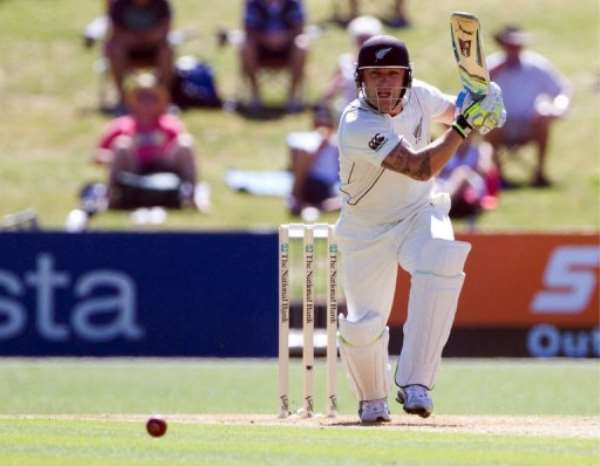 NAPIER, New Zealand (AFP) - New Zealand were in control on 194 for two at tea on the opening day of the one-off Test against Zimbabwe in Napier on Thursday, despite the loss of two quick wickets.

The hosts went into the break with opener Brendon McCullum on 82 not out and Ross Taylor on 41 after being sent into bat on a green-tinged wicket expected to favour the bowlers.

But the track proved far from unplayable and New Zealand dominated the early stages, with openers McCullum and Martin Guptill looking uncomfortable at times but digging in to see off the new ball.

The pair brought up their century partnership shortly after the lunch break and looked to be settling as they both notched half centuries and maintained a steady stream of boundaries to keep the scoreboard ticking over.

But Test debutant Shingi Masakadza provided the breakthrough for Zimbabwe, ending the partnership on 124 when Guptill's attacking instincts finally got the better of him and he edged a rising ball to wicketkeeper Tatenda Taibu.

Guptill's replacement Kane Williamson was sent back to the pavilion three overs later after a mix up with McCullum in the middle saw him run out for four.

The 21-year-old scampered down the wicket after driving spinner Graeme Cremer to the covers while McCullum, seeing he was not going to make the single, retreated back to the non-striker's end and left his partner stranded.

He proved up to the task, punishing Cremer as he scored 41 off 65 balls, while McCullum proved uncharacteristically patient chasing his seventh Test century at the other end.