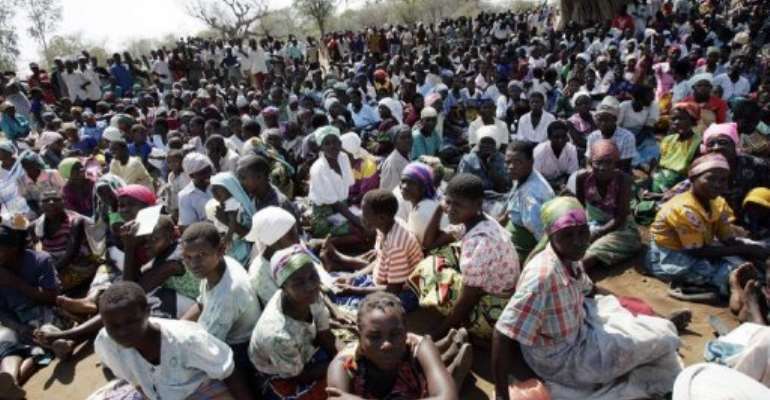 Malawian farmers from Tengani village, in Nsanje district wait to get a ration of maize in 2005. By Gianluigi Guercia (AFP/File)

BLANTYRE (AFP) - About 5,000 people have fled their homes to escape floodwaters in southern Malawi, due to heavy rains from a deadly cyclone that is battering neighbouring Mozambique, authorities said Wednesday.

Army helicopters and motorboats were deployed to the southern district of Nsanje, along the Mozambican border, to rescue marooned villagers.

Nsanje has been "receiving heavy rains since mid-last week which has resulted in two big rivers to break their banks and flood scores of villages," district commissioner Rodney Simwaka told AFP by telephone.

The Shire River, which flows out of Lake Malawi, and the Ruo, which originates from the picturesque Mulanje Mountain, have flooded following heavy rains caused by Cyclone Funso, a powerful Category 4 storm moving slowly through the Mozambican Channel.

Simwaka said about 2,500 villagers fled to hills when the floods hit homes along the rivers.

"Several thousands of people are still marooned in dry patches of land in the flooded villages," he said.

Roads and bridges leading to Nsanje, 175 kilometres (110 miles) from the commercial capital Blantyre, had been washed away, cutting off 30 villages.

He said the helicopter and engine boat operation to rescue the villagers started on Tuesday. Only 99 villagers have been flown to safety and were being housed in schools and churches where the government was distributing food and relief items.

No deaths were reported, but hundreds of hectares of the maize fields were under water and scores of cattle, goats and chickens had been washed away, he added.

The district is prone to floods every year and thousands of villagers defy government orders to move to higher land because they want to grow crops in river banks after the floods, which leave soil rich in silt.