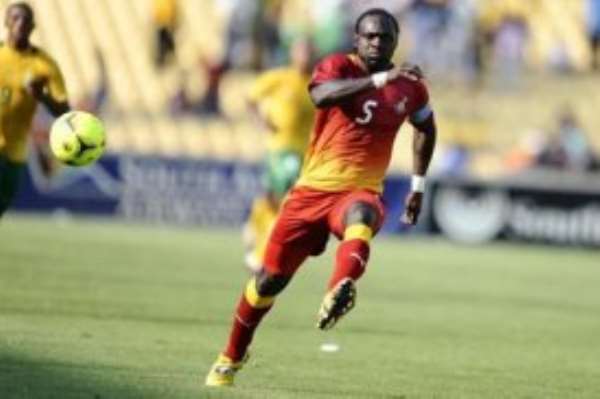 For the first time in many years, members of the national team, the Black Stars, will be made to pay the appropriate taxes on their earnings and bonuses, an official of the Ghana Footballers Association (GFA) has confirmed.

There are hints about each player receiving US$90,000 when the team gets to the final and about US$20,000 each at the various qualifying stages.

The move to get the members of the team to honour their tax obligations is expected to earn the country some thousands of Ghana cedis.

The Spokesperson of the GFA, Mr Randy Abbey, told the GRAPHIC BUSINESS in Accra, that “all arrangements have been made and the paying authority, which is the Ministry of Youth and Sports, will deduct the taxes on the bonuses at source”.

Although this may be a welcome news to many, it is not clear how much the government intends to spend on the players and the tax element on the bonuses.

The issue about the payment of taxes on the bonuses of the players of the Black Stars arose when it became public how much each player received for their participation in the 2010 World Cup held in South Africa.

But Mr Abbey said this time around “the players would be made to pay and that will be deducted at source before the players receive their bonus”.

Some financial analysts have pointed out that should the 17.5 per cent cumulative tax deductions be slapped on their earnings, the amount to be realised could be used for meaningful purposes.

Mr Abbey said the payment of taxes on bonuses of national team players in any of the sporting disciplines began with the All Africa Games at Maputo, Mozambique last year and noted that since it were the wish of the people to see the players of the Black Stars pay taxes, it would be done.

“Since the days of the first President, Dr Kwame Nkrumah, no taxes have been slapped on the bonuses of players and that had been the norm until now that Ghanaians are demanding it”, he said.

Mr Abbey said the players had been made aware of it and they had made it clear to the authorities that “whatever they are paid should be the take-home bonus”.

THE LOCAL LEAGUE AND TAX
The issue about the payment of bonuses raises issues about whether the winning bonuses paid to players in the local league are also tax deductible.

Players are paid cash after their matches when they win and it is not clear whether they pay taxes on them.

OTHER PLAYERS AND TAX AVOIDANCE

Tax issues regarding soccer players around the world has always been a controversial one. The players pretend not to know about their civic obligation and they are assisted by those who pay them to evade taxes.

A cabinet minister in Italy has suggested that top players, who earn up to GB£8 million a year, should pay a lot more into the public purse.

Roberto Calderoli, the Minister for Administrative Simplification, said players in the country's Serie A league often behaved like 'spoiled children' and should be made to contribute more as the government struggles with a public debt equivalent to 120 per cent of Gross Domestic Product (GDP).

The Mail of the United Kingdom also reports that Manchester City's Barry took home GB£135,000 more than if he had paid an income tax at 40 per cent.

Now the taxman has demanded the clubs pay GB£100 million on behalf of their players as HM Revenue & Customs (HMRC) investigates how to stop the arrangement.

The Sunday Times around the same period have uncovered 55 players who are taxed at just 22 per cent because they get a large proportion of their total earnings from their image rights companies.

The players have two contracts with their clubs. They get a salary as a player and the other is for 'image rights' – earnings from shirts and other merchandising.

These royalties are paid into a company which is only liable for 28 per cent corporate tax rather than the 50 per cent income tax.

The players can take out loans from their companies where they only pay two per cent tax on the sum because it is regarded as a benefit in kind.

Investigations by the Sunday Times showed the GB£200,000-a-week Rooney, Barry and Chelsea's Daniel Sturridge took advantage of this tax loophole.