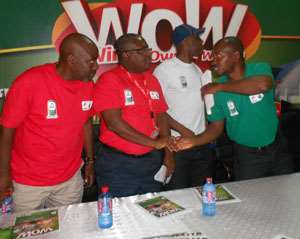 The National Lottery Authority (NLA), in association with Airtel Ghana and Edlorm Housing Limited, has launched a new gaming promotion called 'Win, Own and Walk In' (WOW).

WOW is targeted at SMS trivia fans, the young at heart, established NLA mobile gaming patrons and Airtel subscribers who dream of building or owning houses and improving their businesses.

At the launch in Accra, the acting Director of Corporate Planning and Sale at NLA, Kplorlali Shine Gbologa, explained that 'at a cost of GH¢0.60, any Airtel prepaid subscriber aged 18 years and above, who sends a text message - WOW-  to short code 7220, stands the chance of winning several prizes.

'These include a plush two-bedroom house from Edlorm Villas and a weekly star prize of GH¢10,000. They could also become one of the six winners every week who take home GH¢500 for being the highest daily texters, win laptops, Motorola dual SIM phones; and airtime (on net invoice only) per week.'

Winners, he noted, will be selected weekly through NLA supervised draws.

However, the first 2-bedroom house will be given out half way into the duration of the game.

He explained that WOW is aimed at satisfying customers and tackling the stigmatization associated with playing lottery games.

According to Mr. Gbologa, the collaboration between NLA, Airtel and Edlorm Housing Limited shows the philosophy they share in helping people to better their lives.

He said the mandate of the NLA is to bring development to the nation or directly to individuals through games, adding that Airtel endeavours to create the freedom for people to improve their lives while Edlorm Housing strives to give quality homes at less cost.

In an address, Philip Sowah, Managing Director of Airtel Ghana, said 'in line with Airtel's brand promise of 'more freedom to do', WOW comes at an opportune time since at the beginning of every year, families contend with expenditures like rent, school fees and other financial obligations.

He reiterated that Airtel will continue to build on its reputation of connecting communities across Ghana by providing affordable, relevant and innovative mobile solutions that will delight its customers.

The Managing Director of Edlorm, Eddie Kotey, expressed the company's delight to be part of the promotion.

The promotion runs from now to the end of March 2012.