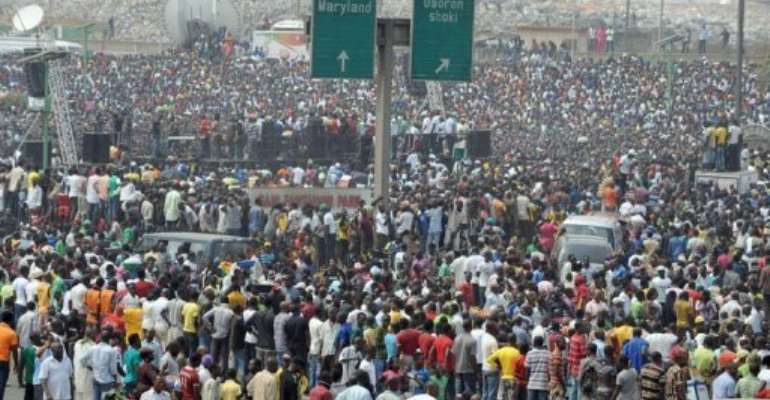 Nigerians gather during a protest against the scrapping of oil subsidy at Gani Fawehinmi Park. By Pius Utomi Ekpei (AFP/File)

ABUJA (AFP) - Nigeria's labour unions said they were considering their next moves after talks Sunday with President Goodluck Jonathan aimed at ending a week-old strike and mass protests over fuel prices.

"We have come and listened to the president ... on the issue of removal of fuel subsidy and we are going now to analyse the submission of Mr President and take a decision," said Nigeria Labour Congress chief Abdulwahed Omar.

Asked whether the strike that has shut down the country would resume as planned on Monday after a weekend pause, he said, "there are a wide range of possibilities."

Jonathan was expected to address the nation either late Sunday or Monday.

Talks on Saturday at the presidency failed to end the strike over soaring fuel prices in Africa's largest oil producer due to an end to government subsidies.

But the mediator in the crisis, Senate President David Mark, said earlier Sunday that the government had reached a decision on how to move forward.

A nationwide strike and protests that began January 9 have brought tens of thousands into the streets and shut down Africa's most populous nation.

While the strike was suspended for the weekend, labour leaders warned it would resume Monday if a deal had not been reached. But an earlier threat to shut down oil production however has been put on hold.

Unions launched the strike after the government ended fuel subsidies on January 1, which more than doubled petrol prices overnight.

Earlier Sunday, Mark was upbeat after a meeting with Jonathan, state governors and lawmakers involved in the talks.

The government had reached a decision on the dispute and would soon announce its position, he said.

"I think this is the best meeting we have had," Mark told journalists.

"Definitely this night, you will know the decision. A decision is already taken and that decision is what the nation will be waiting for."

Earlier Sunday, Jonathan met the country's security chiefs, but no details of the talks were released.

Unions leaders said Sunday morning that the previous night's talks had failed because the government was refusing their demand to bring petrol prices back down to pre-January 1 levels before further negotiations.

Meanwhile, queues at petrol stations stretching for several blocks in some areas formed on Sunday, with drivers facing a four-hour wait as they tried to take advantage of the break in the strike to refuel.

The country's main oil workers union had threatened to begin shutting down crude production at midnight (2300 GMT Saturday) if a deal was not reached.

But a spokesman for the oil union, PENGASSAN, said that while that threat remained, it would only be implemented "if the negotiation process breaks down".

The decision by Nigeria's government to end fuel subsidies without warning caused petrol prices to jump overnight from 65 naira per litre ($0.40, 0.30 euros) to 140 naira or more.

The main protests in major cities have been largely peaceful, though at least 15 people are believed to have been killed in various incidents.

The strike and protests have put the government under mounting pressure at a time when it is also trying to stop spiralling attacks blamed on Islamist group Boko Haram, which have raised tensions and led to warnings of civil war.