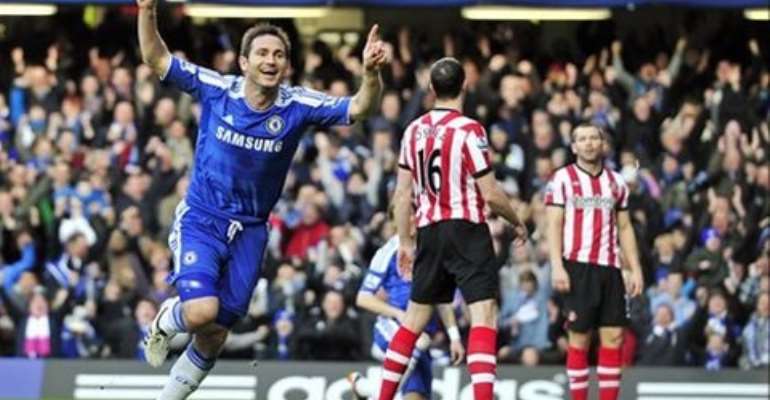 Lampard celebrates his first-half winner - his 11th goal this season

Lampard reacted quickly to bundle the ball home from close range after a breathtaking volley from Fernando Torres crashed back off the bar.

Torres, Lampard and Juan Mata all had chances to add to the lead.

But Sunderland created as many openings as their hosts and will particularly rue two glorious late chances missed by Craig Gardner and Nicklas Bendtner.

Substitute Gardner was the bigger culprit, shooting wastefully wide with a first-time effort from 12 yards after a brilliant run and pull-back by Sebastian Larsson.

But Bendtner should have done better, chipping an effort high and wide in injury time.

James McClean also miskicked when well placed in the second half but Chelsea, who were able to bring on fit-again midfielder Michael Essien as a late substitute, rode their luck to see out the win and close the gap to third-placed Tottenham to six points.

Sunderland played with purpose and quality and will feel aggrieved to be leaving Stamford Bridge with nothing after an impressive second half.

Having won five of their seven matches under O'Neill, they started promisingly and were only denied what appeared a certain goal early on by a brilliant piece of defending by Jose Bosingwa.

The Portuguese came in for some fierce criticism for a less than inspiring defensive display in the win at Wolves, but he did superbly to dart in front of McClean and prevent a free shot at goal from eight yards after a brilliant, bustling run by Stephane Sessegnon.

Sessegnon was the key man for the Black Cats and was a constant menace to the home defence, operating just in behind lone striker Nicklas Bendtner.

But it was Chelsea's creative dynamo Juan Mata who turned in yet another decisive performance to add to an ever-growing list.

Mata played the telling pass for Lampard's opener after some wonderful, patient build-up play that involved both full-backs and all of the Chelsea midfield and attack.

Raul Meireles saw his initial strike blocked, but the Blues retained possession and Mata's dinked cross to the far post was acrobatically volleyed against the bar by Torres, and Lampard somewhat fortuitously managed to knock the ball over the line.

Spaniard Mata also saw a fine long-range free-kick saved in the first half and his trickery and ability to pick a final pass always seemed likely to provide a second home goal.

Torres, buoyed by his early contribution, saw a low shot go just wide and then saw a goalbound header cleared by the backpedalling Phil Bardsley.

Lampard also had a volleyed attempt blocked as Chelsea looked to settle the game before the break.

But the Black Cats responded in style and Bendtner was very unlucky to drift a low shot past the post after a fine pass from Sessegnon.

And Sunderland got on top after the interval.
David Vaughan fizzed a fine shot narrowly past the post and Bendtner had a strong shout for a penalty ignored by referee Phil Dowd after going down in the box following a heavy challenge by Ashley Cole.

Torres also had a Chelsea claim turned down when he seemed to be bundled over by John O'Shea, while Raul Meireles went close with a deft chip.

Essien came off the bench after six months out with a knee injury to lift the home crowd with 15 minutes remaining.

However Chelsea, who will have Gary Cahill in their ranks for next Saturday's game against Norwich at Carrow Road, were looking increasingly shaky and the visitors should have claimed a point.

But they lacked the composure to take advantage of the home side's frailties, squandering the three superb chances they created in the closing stages.

Sunderland manager Martin O'Neill:
"We had a fantastic second half. We created a number of clearcut chances and we weren't able to take just one of them. We are wondering how on earth we lost the game.

"With a bit of composure we could have scored four goals. We had enough chances to have won three games. And we had a clearcut penalty.

"The performance was excellent and we can take some consolation from the fact the fans were screaming for the final whistle."