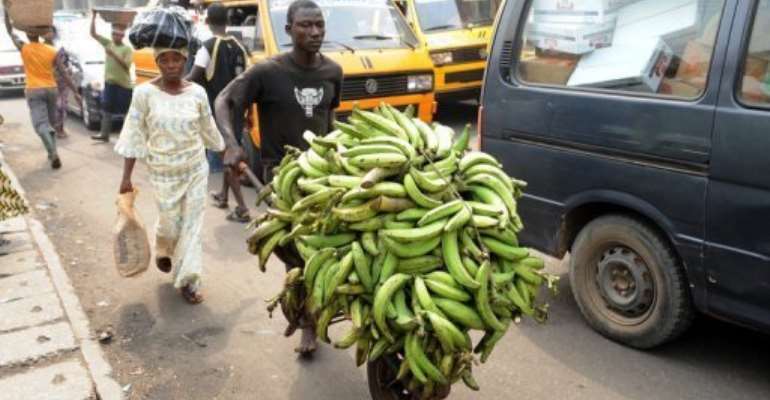 A man transports plantain bananas to a car park in Lagos today as workers suspended a five-day strike. By Pius Utomi Ekpei (AFP)

The country's main labour confederations vowed earlier in the day not to budge on their demand on fuel prices, setting up a showdown with the government before the negotiations at the presidency.

The talks came after the country's unions called for a weekend suspension of the strike and protests that had shut down the country since Monday, prompting Nigerians to rush to stock up on food.

Government officials entered the talks under intense pressure after the main oil workers' union threatened to bring a halt to crude production from midnight by gradually withdrawing its members from platforms if a deal was not reached.

President Goodluck Jonathan was not present when the talks began, but a list of other ministers were there as well as state governors, the senate president and other lawmakers.

The two main labour confederations, Nigeria Labour Congress and Trade Union Congress, held meetings of their executive councils on Saturday and decided to stick to their demand that petrol prices return to pre-January 1 levels.

"We are continuing with the national strike until the prices are reverted to 65 naira per litre ($0.40, 0.30 euros)," Denja Yaqub, NLC assistant secretary general, told AFP.

"If there's any negotiation at all to be done, the negotiation will only start when the price has gone back to 65 naira. We are going to convey the same position to him (President Goodluck Jonathan) tonight."

A source from the TUC said it had decided on the same position.

The move by Nigeria's government to end fuel subsidies abruptly and without warning on January 1 sparked the strike and brought tens of thousands of people out into the streets in protest over the past week.

The move caused petrol prices to more than double overnight, from 65 naira per litre to 140 naira or more.

Nigerians rushed to markets on Saturday to take advantage of the break in the strike to stock up on food, but they found prices had often tripled -- a mix of sellers taking advantage of high demand and the result of increased transport costs.

"All the same, we still have to buy because we have to eat," said Olabisi Adekoya, a 36-year-old mother of four at a Lagos market.

Long queues also formed at petrol stations, with some even running dry.

The main protests in major cities in Africa's most populous nation have been largely peaceful, though at least 15 people are believed to have been killed in various incidents.

Police have been accused of shooting dead at least two people, including one in the economic capital Lagos, while at least two others were shot dead as authorities and protesters clashed in the northern city of Kano on Monday.

A riot broke out in the central city of Minna on Wednesday, leaving an officer killed and several political offices burnt, but the cause of the violence was not clear.

In Benin city in the south, a mob burnt part of a mosque complex on Tuesday while at least five people were killed and some 10,000 displaced as Muslims neighbourhoods were targeted.

The strike and protests have put the government under mounting pressure as it also seeks to stop spiralling attacks blamed on Islamist group Boko Haram, which have raised tensions and led to warnings of civil war.

More than 80 Christians have been killed in bomb and gun attacks in recent weeks, most of them attributed to Boko Haram, in a country roughly divided between a mainly Muslim north and predominantly Christian south.

Late Friday, gunmen attacked two pubs in the northern cities of Yola and Gombe, killing four people and wounding a police officer. Scores of such attacks have been attributed to Boko Haram.