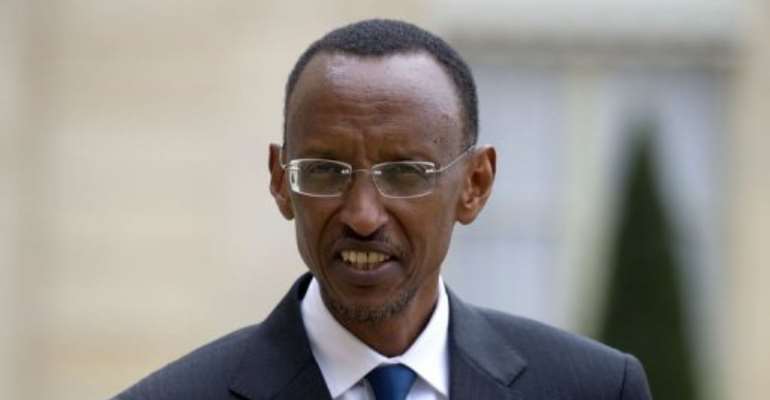 Paul Kagame at the Elysee Palace in Paris in 2011. By Fred Dufour (AFP/File)

The experts' report concluded that the missile that downed the plane was fired from a base held by loyalist forces from Habyarimana's Rwandan Armed Forces (FAR), lawyer Bernard Maingain said.

There was no official confirmation of the conclusion of the report and the judicial inquiry continues.

But the report was swiftly welcomed by Kigali as a "vindication" for Kagame.

The assassination of Habyarimana was one of the triggers that unleashed a genocide that left around 800,000 Rwandans dead.

And the question of where the ground-to-air missile was fired was seen as key to establishing the credibility of two rival accounts of the attack.

The slain pilots on board Habyarimana's Falcon 50 jet were French citizens, giving anti-terror judge Jean-Louis Bruguiere grounds on which to investigate.

After an initial investigation, he alleged that a small commando team from Kagame's then rebel Rwandan Patriotic Front had infiltrated the area around the airport and fired the missile that downed his enemy's plane.

Eight Rwandans close to Kagame were placed under investigation by France for the attack.

But a new French judge who took over the case after Brugiere's retirement, and -- amid a thaw in relations -- was able to send six experts to Rwanda to inspect the scene of the attack and find out where the missile was fired.

A parallel Rwandan inquiry had already found that the attack was launched from a base held by loyalist forces from Habyarimana's FAR, targeting their own leader because he was seen as too moderate.

The French experts have now come to the same conclusion, according to the lawyer for the eight Rwandans, and judge Marc Trevidic will now have to decide whether to drop Brugiere's allegations against Kagame's camp.

"Our clients who were unjustly accused and investigated for years have now been proved right," said Mangain.

Rwandan Foreign Minister Louise Mushikiwabo said the findings were a "vindication" for Rwanda's long-held position on the events of April 1994 and had "slammed shut the door on the 17-year campaign to deny the genocide or blame its victims".

"It is now clear to all that the downing of the plane was a coup d'etat carried out by extremist Hutu elements and their advisors," Mushikiwabo said in a statement.

"It clears those falsely accused of shooting down the plane and brings a decisive end to the lies and conspiracy theories that have, for far too long, tried to divert the world's attention from the actual authors of horrendous crimes that took place in Rwanda during the genocide."

Following the 1994 attack, hardliners from the slain president's Hutu ethnic group, led by members of his inner circle, began to slaughter members of Kagame's Tutsi minority.

Kagame's rebel FPR eventually managed to overthrow the Hutu-led regime, and peace has returned to Rwanda, but relations with France remain strained.

Some in Rwanda accuse French forces, which had close ties to Habyarimana's forces, of siding with the Hutu death squads, a charge angrily denied by French officials from the era.

Relations were further strained by Bruguiere's investigation, which caused Kigali to temporarily break off ties, but since Nicolas Sarkozy was elected French president in 2007 he has worked to improve relations.

Kagame and Sarkozy have now visited each other's capitals and diplomatic relations have been restored, but ongoing judicial probes in both countries are still a source of disagreement.