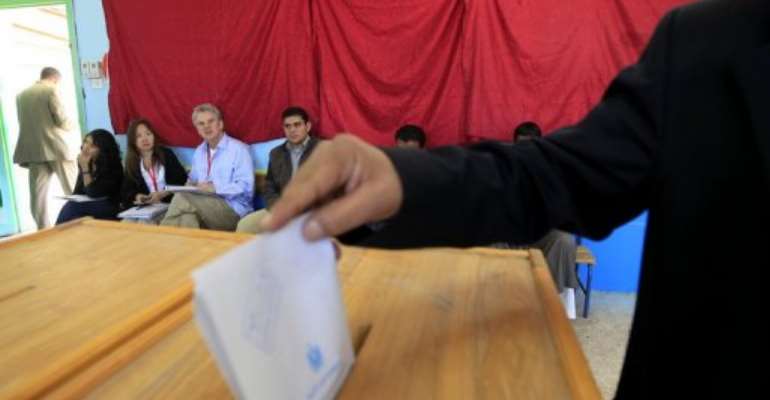 Foreign election monitors watch as an Egyptian casts his ballot at a polling station in Sharm el-Sheikh. By Mohammed Abed (AFP/File)

CAIRO (AFP) - Former US president Jimmy Carter gave the thumbs up on Tuesday to Egypt's parliamentary elections, saying the people's will was "expressed accurately."

"We have been very pleased," Carter told reporters during a tour of a polling station at the Rod al-Farag girls' secondary school in a working class district of the Egyptian capital

He said the election -- a three-staged process launched in November to choose the first parliament since mass protests forced former president Hosni Mubarak to quit -- had been peaceful despite "some problems."

"But in general the will of the people has been expressed accurately," he said on the eve of the end of the polls.

The Carter Center is one of the few monitoring group to have had a licence to witness the election, and the former US president will hold a news conference on Friday.

Carter arrived in Egypt on Monday to join a Carter Center delegation of 40 witnesses representing 21 countries deployed in Egypt since mid-November, the statement added.

The powerful Muslim Brotherhood, the country's best organised political movement, has claimed the lead through its political arm, the Freedom and Justice Party (FJP).

It has been closely followed by Al-Nur, which represents the ultra-conservative Salafi brand of Islam, raising fears among increasingly marginalised liberals about the prospects for civil liberties and religious freedom.

Under the complex electoral system, voters have been asked to cast three ballots -- two for individual candidates and one for a party list -- for the 498 elected seats in the lower house.

On Tuesday, Egyptians were voting in second-round run-offs for the third and final phase of the election.

The run-off, which takes place over two days in the last nine of the country's 27 provinces to vote, is for individual candidates.

The election is to be re-run in several constituencies between January 14 and January 19, after complaints over the conduct of the first-round voting were upheld.

The electoral commission has yet to announce when it will publish the final results.