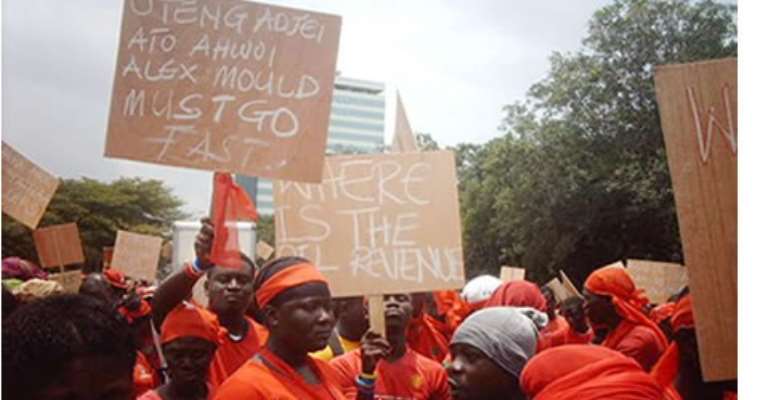 AFAG in one of their demonstrations against government

Pressure Group Alliance for Accountable Governance (AFAG) will hit the streets again January 25 in a demonstration they have christened Atta-Wayo.

The group is lamenting what they say is the strangling fuel price hikes by the governing National Democratic Congress.

Key government officials including the president and his vice have supported the increases.

President John Mills at his encounter with journalists and editors on Monday explained that increasing fuel prices was one of the most painful decisions he had to make, but it was a necessary evil.

He contended that subsidies paid on petroleum products are so huge it was affecting government's ability to provide other basic social amenities to the people.

He stressed the removal of the subsidies will enable government to channel the resources into other productive areas.

But AFAG claims the president has been dishonest in the fuel politics.

At a press conference to announce the January 25 demonstration, a leading member of the group, Abu Ramadan said the posture of the NDC since coming into power from January 2009 is unacceptable.

He insisted monies accrued out of the sale of illegal margins imposed by the NPA on petroleum products could be used to defray the cost of subsidies.

“What has happened to the monies up to the tune of 690 million cedis lodged at Ecobank as a result of the illegal margins on petroleum product price build-up. Is this not able to provide over 20 years of relief as subsidies on petroleum products to Ghanaians?” he quizzed.

“…We are happy to announce to you AFAG's Atta Wayo demo to be held in Accra on Wednesday 25th of January 2012.”