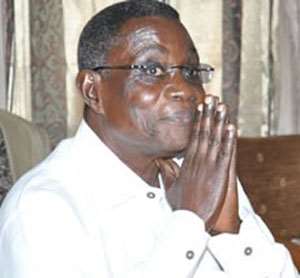 President Mills is set to meet the country's journalists today January 9, 2012 to brief them on what he has been doing so far and his plans for the last lap of his four-year mandate given to him by Ghanaians to steer the affairs of the nation.

The meeting, which is scheduled to take place at the seat of government, the Osu Castle, promises to be interesting, considering the fact that most journalists invited to the programme, especially editors and senior reporters, are already planning and preparing their questions ahead of time.

Presidential Spokesperson and Communications Director at the Presidency, Koku Anyidoho, who is in-charge of the event, said all was set for the occasion which from all indications is likely to be a gruelling encounter between the President and the country's journalists considering the fact that Mills is in the last lap of his mandate and the meeting would likely be his last with journalists.

Some of these journalists would want to know, at first hand, the president's position on a wide range of issues that has beset the nation over the past three years since he assumed office as President of the Republic.

Issues which are expected to feature prominently on the day include the controversial but infamous 'Woyomegate' judgment debt scandal which has generated a lot of public interest over the last couple of days.

Many Ghanaians including journalists would be seeking answers to the million-dollar question as to why government decided to enter into a consent judgment with Alfred Agbesi Woyome, the man at the centre of the raging controversy, and proceeded to dole out a whopping GH¢58million at a go to this self-acclaimed financier of the ruling National Democratic Congress (NDC) contrary to the directives and provisions of the court to pay in instalments, and the fact that he has no existing contract with the state.

Joy FM's Super Morning show host Kojo Oppong Nkrumah told DAILY GUIDE he would be disappointed if the event turned out as one that just goes through the motion. He expects the president to tell Ghanaians what he had been able to achieve since assuming the reins of government.

Some senior journalists had already marked down the president in their various articles, rubbishing the action year mantra declared last year as farcical.

For that matter, Kojo said he expected journalists who would be there to ask prudent questions that affect the basic needs of Ghanaians, especially those promised by President Mills and his ruling National Democratic Congress (NDC) in their manifesto, and not the usual rhetoric that often characterized such events, considering the fact that 2012 marked the end of the president's four-year mandate.

Kojo expressed the hope that the president would ease the minds of Ghanaians about several controversies that had beset his government including the Woyomegate scandal, the $3billion Chinese loan and a host of others.

Editor of The Searchlight newspaper, Kenneth Agyei Kuranchie, believes the president's meeting with the press would be more of the same rhetoric, with Professor Mills probably giving himself 90% for his performance.

'I expect him to pass the buck; give excuses for his failures. I don't expect anything much because if you couldn't give hope to the people for the past 3years that you have been in office and you declare 2012 as 'a year of hope', what is the essence?' he asked rhetorically.

Vice President of the Ghana Journalists Association (GJA), Affail Monney, anticipates the event to be stormy considering the fact that there are several issues begging for answers, and expects the president, as an embodiment of power, to provide these answers since 'as President his position carries weight.'

He expects President Mills to address issues including his promised cabinet reshuffle, the Woyomegate scandal, teachers' continuous cry for payment of salary arrears as well as the biometric and verification exercise towards the 2012 general elections.