The Incredible Confession of a Young Swiss Lady 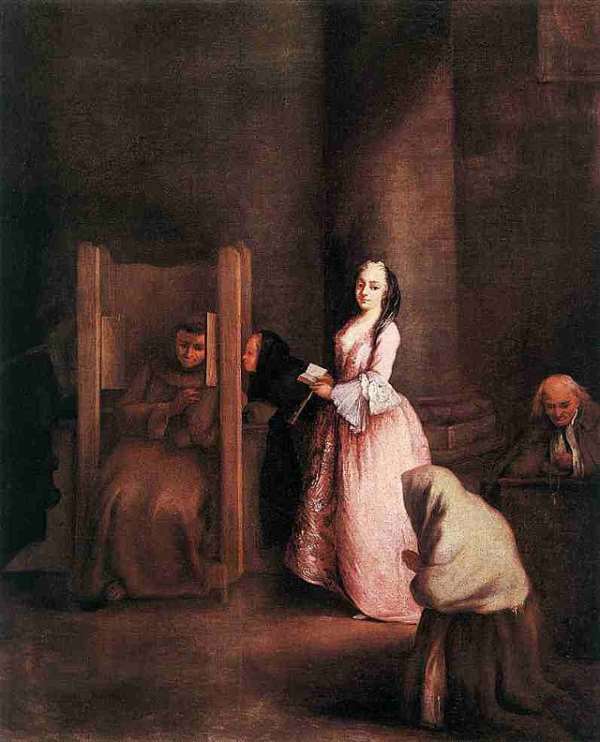 As a student and an African immigrant in Europe, I have enjoyed incredibly wonderful friendships, I have experienced immense happiness, I have been made an object of mockery on numerous occasions, I have tasted massive pain and sorrow, and I have been a witness to shocking but not unexpected revelations.

My search for knowledge has taken me to almost every corner of Europe: Italy, Germany, France, Spain, Switzerland, Austria, Czech Republic, Poland, the UK, etc.; and I have had mixed experiences in these countries; but the negative ones could significantly be blamed on the visionlessness, empty-headedness, selfishness, greediness, and incompetence of our so-called political elites.

My interest in travelling developed in the year 2000 when I found myself in Italy (specifically Rome) as a young student pursuing a BA and a Postgraduate Diploma programmes in Theology and Bioethics respectively at a Pontifical University. This article thus recounts an incredible encounter with a young Swiss Lady in 2002. The rationale is to partially substantiate my argument that White people's lack of respect for Black Africans should be considerably blamed on our visionless, greedy and incompetent leaders.

In 2001, I embarked on a-one-month trip to the Czech Republic and neighbouring countries with a group of other young students. The entire group stayed in a town called Hejnice near Liberec throughout the one month duration. I had heard prior to this trip that Blacks were generally not warmly welcomed in many Eastern European countries. I was thus expecting a quite negative reception from the Czechs in Hejnice; but the contrary was the case as the Czechs were enormously hospitable. Honestly, the number of friends that I made in Hejnice (a town with less than 3,000 inhabitants) in one month was bigger than that managed in Rome (a city with about 3 million inhabitants) in over 3 years.

I of course did occasionally find myself in somewhat uncomfortable and embarrassing situations. There were occasions that some young people that I was later told had not seen a Black person face-to-face all their lives, approached me to touch my cheeks or my hand, probably to establish if my skin was as soft as theirs and not as hard as that of a chimpanzee. This was however not strange to me as I used to do the same to some of the Whites I came into contact with in my hometown when I was a child, as I thought their skin was as fragile and could easily leak blood as it appeared.

One huge negative experience I had on that trip was the dehumanizing ordeal I was subjected to when a Czech friend and I visited Zawidów, a town in south-western Poland where the country shares border with the Czech Republic. I was held at the border for over two hours and subjected to a thorough search after my passport with my Polish visa which was for educational purpose, had been diligently examined and a number of phone calls had been made to, I don't know where, for verification. This border unlike others was hardly used by travellers and was thus as quiet as a cemetery, yet it took the six or so immigration officers on duty more than two hours to verify my documents and to carry out a search on me even though I had only a tiny handbag containing just my packed lunch.

What I went through when returning to Hejnice was even worse. This time, they did not just search me; they invited a crew to video the search process so that even my packed lunch was also quite embarrassingly filmed. I said no word as none of the so-called immigration staff understood English and I did not understand their language either. My interpreter was the Czech companion who knew little Polish and very little English. By the time they were through with me, I had spent over three hours at the border all because of the colour of my skin, and my place of origin.

Then in July 2002, I travelled to Domodossola, a beautiful town in northern Italy. I had heard a lot about the beauty and fascinating history of Locarno, an Italian-speaking Swiss city located on the northern tip of Lake Maggiore at the foot of the Alps, with a population of about 18,000. So when I found myself in Domodossola, I decided to use the opportunity to visit this city since it is only 50km away from the northern Italian town. I visited as many important places as possible while in the city of Locarno, and encountered many nice and welcoming people.

After satisfactorily exploring Locarno, I returned to the train station to catch the next available train back to Domodossola in Italy. The next train was half full but was scheduled to depart in 10 minutes. I got myself a window seat waiting patiently for departure. About a minute before departure, a young lady jumped on the train. There was now only one unoccupied seat available on that coach, and that was the seat next to mine. Surprisingly, she chose to be on her feet until a couple of passengers got off at the next stop before taking one of the other empty seats that had become available. None of those White people who boarded the train after me fancied a seat beside a Blackman in some “funny” bright KENTE shirt, and she was no exception. I felt quite embarrassed and dehumanized, but I remained strong as this kind of occurrence was not new to me; I had had similar experiences a million times before in Italy.

We eventually arrived at the Italy-Switzerland border where IDs and travel documents of each and every passenger were checked and verified by the Italian immigration authority. I needed some clarification on the terms and conditions of my Swiss visa, so I was advised by the Italian officers to rather speak with the Swiss staff as they (the Italian Officers) had no answers to my questions. I thus got off the train and made my way to the Swiss immigration office. Interestingly, the lady who preferred standing to sitting beside a Black person had been denied entry to Italy because she had mistakenly left her Swiss ID at home. She thus had to get some kind of travelling document from the Swiss immigration authorities before she could be allowed by the Italians to cross the border to Italy.

One interesting thing about Switzerland, for those who are not familiar with the country, is that there are at least four official languages spoken there: Swiss German (predominant in cities such as Zurich, Bern, Basel, Lucerne, Winterthur, etc.), French (which dominates in Geneva, Lausanne, Montreux-Vevey, Sion, and others.), Italian (spoken in Lugano, Bellinzona, Locarno, etc.), and Romansh (used mainly in Chur). The lady in question was from a Swiss German speaking canton or region and could speak only one of the languages mentioned above – Swiss German. Unfortunately for her, none of the officers on duty at the time could speak German; they instead spoke Italian and French only. It was thus obvious that communicating effectively with her own countrymen was bound to be a fruitless endeavour.

After finishing my business with the authorities, and realizing that the lady could speak English, I offered to come to her rescue by serving as an English-Italian interpreter. They needed a great deal of information from her to ascertain the veracity of her claim that she was a Swiss citizen. I did my best to ensure that communication between the two parties was a success. Eventually, she was issued with a travel document to enable her continue her journey to Italy. To avoid missing the next train which was due to arrive in a couple of minutes according to the time-table, I rushed to the train station; but disappointingly it arrived more than half an hour late.

As I sat there glancing through a newspaper and patiently waiting for the train, the lady I just rescued showed up.

'Hi, thanks for your help once again', she uttered.

'Don't mention it.' I responded without establishing any eye contact.

'What did you say your name is?' She asked.
'Owusu-Ansah; call me Emmanuel if you can't pronounce my surname', was the reply.

'Where are you from; Africa?' She asked.
'Ghana', I answered.
'Where is Ghana?' She enquired.
'Could you please check it up online when you get home?' I cheekily but respectfully responded with my focus still on the newspaper. Believing that I was probably not interested in entering into a conversation with her, she politely uttered, 'I hope I'm not disturbing you; am I?

'Not really' was my response.
'How come you speak both English and Italian?' was her next question.

'The former they say is the official language of my country; the latter is the language of the country in which I live now.' I explained

'Did you just say “they say [English] is the official language of” Ghana? You are funny; who are the “they”?' She questioned.

'I don't know, but Akan or Twi is my lingua franca – that is the language I know.' What was apparently meant to be a brief chat evolved into a very deep and lengthy conversation and debate on a number of issues – academic, socio-cultural, political, religious, philosophical, etc., lasting more than an hour. The 25-year-old Barbara had as a matter of fact a very strong academic background, and spoke English quite fluently and almost impeccably having studied in Florida for close to a decade, as I came to establish in the course of our conversation.

We find ourselves in a world in which the unexpected or unimaginable at times turns out to be the reality, and the expected, an illusion. The lady, who barely an hour ago would not sit close to a Blackman on a train even if she was offered money to do so, was now seeking the permission of this very Black person to sit beside him on a similar train. The terrible enemy has now become a great friend. Such indeed is life.

Barbara was so touched and nourished by what she called my 'words of wisdom' during our lengthy conversation, and felt so guilty of her previously unfriendly attitude towards Black Africans that she burst into tears at some point during our interaction.

'I'm sorry Emmanuel, I'm deeply sorry'; she repeatedly pronounced in a hardly audible voice with tears still flowing from her eyes like a waterfall.

'What is she sorry about?' was the first question I posed to myself. But I needed to say something more consoling to make her feel better even though I was not sure of the rationale behind the tears and the apologies.

'That's alright, there is nothing to be sorry about; this is one of the things that happen quite naturally', I insisted in a fairly gentle tone. My statement was based on my initial belief that she was apologizing for shedding tears in my presence; but I was dead wrong. It was rather a preamble to an extraordinary confession that she was about to make.

'I hope you'll forgive me', she uttered before proceeding to drop the bombshell.

TO BE CONTINUED
Emmanuel Sarpong Owusu-Ansah (Black Power) is an Investigative Journalist, a researcher and the author of Fourth Phase of Enslavement (2011). He may be contacted via email ([email protected])