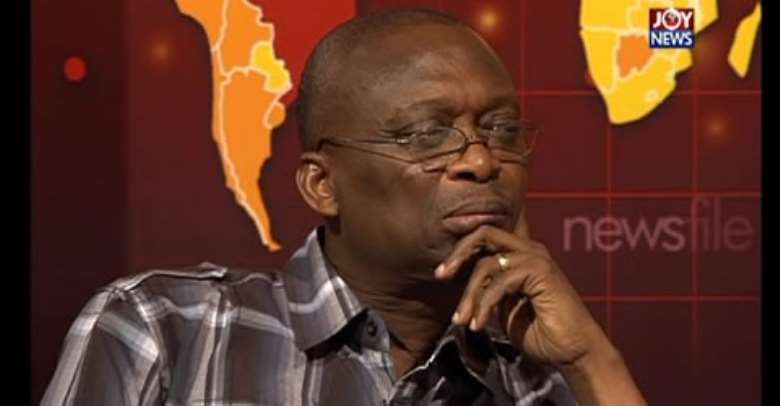 Editor-in-chief of the New Crusading Guide newspaper Malik Kweku Baako is smelling conspiracy between a financier of the NDC, Alfred Woyome and private contractor, Waterville to dupe the nation.

Woyome has been paid a total of ¢42 Million in judgement debt for a contract he claimed was abrogated by the erstwhile New Patriotic Party.

The payment has generated a swirl of controversy with the president John Mills demanding an investigation from the Economic and Organised Office (EOCO) into how the liability was incurred.

But on a discussion on Joy FM and MultiTV's news analysis programme Newsfile, Kweku Baako Jnr. was eloquent in his critique of Woyome, Waterville and bemused with how government led by its then Attorney General Betty Mould Iddrisu handled the whole matter.

He is convinced that even as a layman, no lawyer would be able to beat him on this case, given the chronology of events, the facts of the case available to him.

Facts of the case
The New Crusading Guide paper editor was shocked at how Woyome, a person who had no direct contract with government could be paid that whopping amount of money.

“Woyome has himself said he has no contract with government,” Baako began his submission on the matter.

He stated that Vamed Engineering, the company on whose behalf Woyome claimed to be representing, on some occasions, wrote a letter on July 1, 2005 in which it officially transferred all its interests relating to the construction of the stadia for the CAN 2008 to Waterville.

“As of today-July 1, 2005- Vamed Engineering will not be involved in or accept any liability for the financial engineering or any other aspect relating to the stadia or atomic energy projects,” Malik Baako read portions of the letter as saying.

Vamed was one of the original companies which presented its bids to the Procurement Authority for consideration for the building of the stadia.

Waterville then accepted responsibility to take over the interests of Vamed following which it (Waterville) was provided a contract by the government to undertake construction of the two stadia, Accra Sports Stadium and El-wak.

Six days later, which was the 7th of August, Waterville through its counsel, Kwame Tetteh wrote to government initially challenging the abrogation of the contract.

On 15 September however, Waterville wrote another letter accepting the terms of the abrogation and rather demanded for payment of the work it had done thus far.

“...Conscious of the delay that such legality will ensue and the adverse impact on CAN 2008 target, we decided without prejudice to our accrued entitlement to accept the decision of the government to terminate the agreement,” signed by the MD, Massimo Masser, Baako read the letter as saying.

Based on the demands by Waterville the then government set up a committee to assess how much money was due Waterville for the initial work it had done on the project.

Malik Baako said on 24 October, 2008 the then Chief of Staff, Kwodwo Mpiani wrote a letter to Waterville informing them that the committee had concluded its investigations based on which government made payments owed Waterville to Michelletti&Consar, the company which concluded the building of the stadia.

No objection came from Waterville to the effect that they had not received their share from Michelleti, Malik Baako emphasised, neither did Michelleti say it was unable to pay the amount owed it, he added.

Woyome Link
Malik Baako said the only period Alfred Woyome came into the picture was a private transaction between Waterville and Powerpack-the company Woyome acted as an alternate Director for a short period.

He said on 19th December, 2005 a “Financial Services Engineering agreement” was signed between M. Powerpack Ltd and Waterville for the former to provide financial engineering for Waterville in its activities in Ghana and elsewhere.

Woyome contended the amount being demanded by Waterville was “grossly exaggerated” Malik Baako quoted a portion of the letter.

According to Woyome, Waterville was only deserving of not more than €5 million without interest and damages with members of the consortium which included himself deserving of some €6 million

Waterville then instructed their lawyer, Kwame Tetteh to intervene and he subsequently wrote to the Attorney General saying Waterville did engage Powerpack to provide financial engineering services but the relationship was terminated in November 2006.

The letter further added: “The stadia contracts were contracted between Waterville and the government of Ghana. Neither, Powerpack nor Woyome was a party. It is therefore wrong for Woyome or Powerpack to make a claim in a contract of which neither was a party.”

Woyome/Waterville U-turn
Shortly after this “tug of war” between Woyome and Waterville, the two Mr. Baako said, somehow conspired, or so he smelt, to dupe the nation with the Attorney General sleeping on the job.

And it was started with a letter written by Waterville on April 20, 2010 to the AG in which it said Woyome was claiming financial engineering from the government of Ghana and Waterville was claiming payment for work done on the project.

Malik's judgement
Malik Baako is convinced Woyome had no right to demand any money from the government, more so when it had been proven that Woyome only had a contract with Waterville and not government a contract agreemnt he had duly been paid for the services he rendered.

He was disappointed with the role of the Attorney General who he said was either inept or slept on the job.

"They (AG's department) slept on the job or they were just clearly inept,” he stated.

In Woyome's defence
But the NDC's Victor Adawudu who was also on the show was convinced Woyome had a legitimate case and has been paid his due.

He said the NDC financier led a consortium called Vamed for the CAN 2008 stadium construction bid.

According to him, Vamed had followed through all the Procurement procedures and were in line to be awarded the contract only for the President John Kufuor to truncate the procedure and award the contract to a Chinese company- a company which he said never tendered for the project.

He cited a cabinet memo written by the then Sports Minister Osafo Maafo in which it was informing cabinet to tread cautiously in its bid to abrogate the Procurement process.

He said the AG based on the facts available to her had every right to say she did not have a defence on the matter.

Adawudu agreed with the AG that the case was indefensible, particularly when there was a legitimate contract which was illegitimately abrogated.

He hinted however that Vamed and some members of the Consortium have taken Woyome to court seeking part of the judgement debt paid him by government.