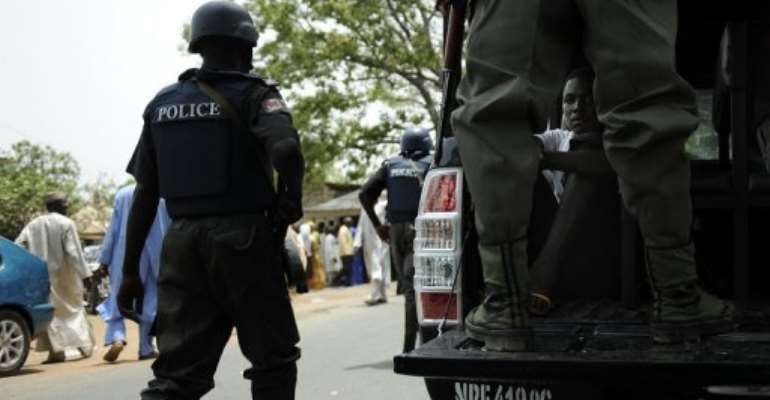 The gunmen shot indiscriminately into the police station, an official said. By Tony Karumba (AFP)

KANO, Nigeria (AFP) - Gunmen have attacked a police station in northern Nigeria's Jigawa state, killing a teenage girl and wounding an officer in the first such incident since a state of emergency was declared.

It was not immediately clear who was behind the attack late Tuesday, though Islamist group Boko Haram has been blamed for scores of such incidents in northern Nigeria.

"The gunmen shot indiscriminately into the police station and engaged our men in a shootout, killing a teenage girl trying to flee and wounding a policeman," Jigawa state police commissioner Hashimu Argungu said.

The decree included parts of Yobe state, which neighbours Jigawa, as well as areas of Borno, Niger and Plateau states.

Some have expressed fears that Boko Haram would shift its attacks to areas not affected by the state of emergency. Tuesday night's attack targeted a divisional police station in the town of Birniwa on the border with Yobe.

Jonathan's declaration came in response to a wave of attacks attributed to the group, particularly bombings at Christmas that killed 49 people, most of them in a gruesome blast at a Catholic church as services were ending.

While Boko Haram has been carrying out increasingly deadly attacks for months, including an August suicide bombing of UN headquarters in Abuja that left 25 dead, the Christmas violence sparked intense fear and outrage.

Muslims have frequently been victims of Boko Haram attacks, most of which have occurred in northeastern Nigeria, but the Christmas Day bombings particularly targeting churches set off fears of retaliation from Christians.

On Sunday, a purported spokesman for Boko Haram warned that the group would confront soldiers and threatened Christians living in the country's north.

The threat from the purported spokesman gave southerners living in Nigeria's north three days to leave the region in the wake of Jonathan's state of emergency decree.

Nigerian authorities said they did not believe militants would follow through on the ultimatum, but added that they were taking no chances.

While the purported spokesman, Abul Qaqa, has claimed to speak on behalf of Boko Haram numerous times in the past, the group is believed to have a number of factions with varying aims and others have also claimed to speak for it.

The spiralling violence blamed on Boko Haram is among a list of major concerns facing Nigeria in the coming days.

Protests have also broken out in various cities since the government announced an end to fuel subsidies on Sunday, causing petrol prices to more than double in a country where most people live on less than $2 per day.

The protests turned violent on Tuesday, with crowds setting bonfires and police firing tear gas. One of the country's main unions claimed police shot dead a protester, but police denied it and said he was killed by a mob.

On Wednesday, hundreds of protesters shut down petrol stations in Kano, northern Nigeria's largest city, and a mob threatened to burn a newspaper office before police stopped them.

A newspaper van was vandalised and a security guard wounded.

Unions met on Wednesday and were expected to announce a date for a national strike to oppose the removal of fuel subsidies. Jonathan also met with his cabinet.