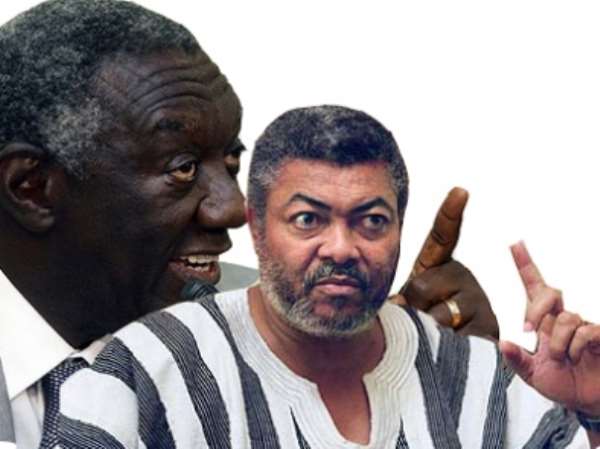 It is common knowledge that Ghanaian politics is heavily infested with insults, especially following the proliferation of the mass media and prevalence of the somehow unfettered exercise of the freedom of expression engendered by our 4th Republican constitutional democracy. I am guilty of it; you are guilty of it; everybody else is probably guilty of it too.

Do you remember how an opponent of President Mills once labeled him as a “chamber pot”? If you do, then, take it as the microcosm of the widespread fetid politics of insults going on. Worse insults are known to have been hurled at others just because they dare indulge in national politics.

This politics of insults has been overwhelmingly condemned but it still rages on as a major political tool for undermining opponents. The barrage of insults is unstoppable. No amount of suasion seems capable of halting it. Prominent Ghanaians have spoken openly against this kind of politics but nothing seems to be influencing the trend for the better. It won't abate because the politicians themselves indulge in it and facilitate it.

Rather amazingly, though, the victims of such insults remain unperturbed as they insist on playing their role in national politics. Let's remember that before they shot into the limelight, hardly would anybody insult them at will for what they were. But once in national politics, they become targets of insults, yet refusing to be deterred. This attitude raises only one big question: What is their motivation for being so invested in our kind of politics in spite of these damaging insults?

Some may attribute it to their patriotism—a strong sense of responsibility toward one's country to demonstrate their good citizenship as they make their acumen available for national development. Such a reason may raise troubling questions: Are we really sure that these people leading us are PATRIOTS so endued with the spirit of altruism as to shrug off these hard-hitting insults to serve us for its own sake? Or that they are in politics because they want to make names or themselves as nation developers to be remembered by posterity? These are some open-ended questions to ponder till eternity.

Others may quickly say that these people are in politics because that's how they can make it “big time” in life. Thus, they are in politics because that's the avenue they consider to be the goldmine to exploit for personal gains. If one considers goings-on, one may be tempted to buy into this perspective. Just take a good look around you and you will not miss what our politicians have turned national politics into. They are all over the place, exploiting loopholes to get rich overnight while the very people who put them in power languish in abject want, disease, squalor, and death, even in the abundance of national resources!

Definitely, once these kinds of politicians know that politics is their abracadabra for solving personal financial and social status problems, no amount of insults or threats will dissuade them from doing politics. They have learnt how to develop tough skins for insults and plow on as the barrage of insults flies about. Such characters seem to be those who have developed the stomach for nonsense in Ghanaian politics—and they weather whatever storm sweeps across the political landscape.

And that is why we hardly get any of them voluntarily resigning his or her position even when caught in morally indefensible circumstances, especially those involving outright bribery and corruption, incompetence, and other immoral acts verging on wife-snatching, visa racketeering, or involvement in crime. And more often than not, they know how to scheme their way out of trouble. How many times haven't some of our MPs, for instance, been exposed for their involvement in criminal acts? And how many of them have ever been prosecuted or removed from their positions of privilege? Or have on their own resigned their positions in consequence?

Because of a conspiracy of sorts, they remain in the thick of events and reap where others have sown. Such characters give cause for open insults and threats of the sort that suggests that our national politics can't survive without insults. It appears that to such characters, the insults rather turn out to be the morale booster that they need to reinforce their politicking. The more insults that strike them, the tougher they become to face the vagaries of our national politics.

For those in politics, these insults have either of two consequences: they may either demoralize them or ginger them up to do what will prove their critics wrong that they are not what is being imputed to them. It seems the first upshot is hardly the case in Ghana politics.

The targets of these open insults may be categorized into two—those who injected themselves into national politics through the barrel of the gun, thereby imposing themselves and their will on the people, and those who followed the laid-down procedures in the democratic dispensation to be where they are as national leaders. I will isolate these two categories of victims for a brief analysis to confirm why despite the persistence of the politics of insults, the victims have remained resolute not to quit national politics.

I begin with the self-imposed national leaders, especially those who were part of military governments whom nobody voted into office. It doesn't really matter whether they later dumped the military garb to become soldiers in civilian clothes. Let's remember that once a soldier, always a soldier. And I have in mind none other but our former President Jerry John Rawlings. We all know the history behind his involvement in national politics and I won't belabour that aspect.

But I just want to say that even though the June 4 Uprising was a spontaneous reaction against what the junior ranks perceived to be going wrong in the administration by their senior officers and received some guarded public acclamation (until the atrocities changed the dynamics), the events that returned Rawlings to power on Thursday, December 31, 1981, were self-orchestrated and positioned Rawlings for whatever he has been receiving from his critics.

Thus, as Rawlings himself put it, “I am prepared to face the firing squad if Ghanaians don't like what I have come to do for them for the second time.” This death wish wasn't fulfilled as he metamorphosed from a military strongman into a civilian President to rule for 8 more years before being stopped in his stride by constitutional constraints. It hasn't still being fulfilled, its place being overtaken by all manner of insults and plain ill-wish against him by his sworn opponents.

Perhaps, no other Ghanaian leader has attracted as much scorn from his opponents as he does. His refusal to “lie low” in his post-office life may be part of the factors keeping him in focus for pinpointed castigation. A cursory glance at comments on the major Ghanaian Web sites that greet anything associated with him says it all. Outright insults and curses dominate. But he still lives on, daring everybody, including the devil himself, to take him on.

In a sense, he may be considered as fortunate to go away with only hard words, contrary to what happened to the victims of his military government's “house-cleaning” exercise. At least, these hard words are far better than the firing squad that he had dared Ghanaians to visit upon him. As he soaks up these insults and continues to roar all over the place, we expect the trend to continue. That is the fate of someone who imposed himself on the people and did what he thought would solve problems. If the hard words being hurled at him were to break his bones, he would have perished long ago. But they haven't, and he is adamant as usual. Let the insults and vain threats fly, he cares less!

Now, to the civilian politicians who willingly chose the path they thought would help them ingratiate themselves to Ghanaians as national leaders. From what was done to the Great Osagyefo to what former President Kufuor endured, we can tell how far insults hurled at them either hurt them or dented their public image. President Mills seems to be the chewing stick that his detractors clean their teeth with at will. Indeed, nothing about him passes by without attracting the usual unprintable words. To some extent, his detractors even openly wish him dead.

The NPP's Akufo-Addo hasn't been spared either. Now at the fringes, gearing up to lock horns with the incumbent on Election Day, he is the target of calumny and open threats. Yet, he seems resolved to press on, hoping to snatch the highest office of the land from President Mills only to become the dumping ground for all insults.

As we near the major electioneering season, we expect the insult spree to intensify. What we don't expect, though, is that any of our politicians will ever decide to quit politics because he/she can't take the insults anymore. It seems even before they enter politics, they have the antidote to the insults. Such is the kind of politician who learns the ropes long before injecting him/herself into the thick of affairs. Insults or no insults, life must go on!

In the final analysis, when the sparks fly, they only “refine” them to do what they are in politics to do. On the flip side, it is the ordinary Ghanaian who bears the brunt of their wayward politicking. If insults are the nourishment for our national politics, so be it. Those with tough skins will definitely carry the day!

• E-mail: [email protected]
• Join me on Facebook at: http://www.facebook.com/mjkbokor
• Get a copy of my novel, The Last Laugh (PublishAmerica.com, April 2009)

More Feature Article
Modern Ghana Links
Islamic separatism and its treasonable impact on Nigeria
Searching for Mahama
Fructifying the peace pact
Nigel Gaisie’s election prophesy and a win for Mahama is just a lottery: ignore them with contempt
4 More For Nana Is Not A Slogan But A Duty We Owe To God
I had a dream: The winner of the 2020 election will get 56.62%
NDC are Struggling in Vain to Sell their Lies-inundated Campaign Messages
NDC Goes Down 20 Percent in Monday Polls
Let's Continue With This Presidency
Dossiers Quotes Coronavirus
TOP STORIES