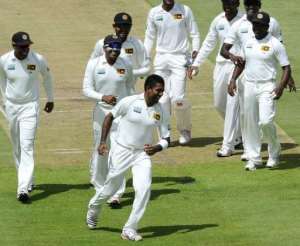 CAPE TOWN (AFP) - Fast bowler Dhammika Prasad took two wickets in his first spell of the series after Sri Lanka sent South Africa in to bat on the first day of the third and final Test at Newlands on Tuesday.

But Alviro Petersen, another player making his first appearance of the series, hit an assured half century as South Africa reached 135 for two at lunch.

Prasad struck with his first delivery of the match when South African captain Graeme Smith attempted a forcing shot off the back foot and edged the ball into his stumps after making 16.

Prasad, who replaced the injured Dilhara Fernando for the series decider, had a second success when Hashim Amla played across the line and was leg before wicket, also for 16. Prasad took two for 30 in six overs.

Sri Lanka's decision to send South Africa in was surprising at a venue where batting first is the norm. Although there was a green tinge to the pitch, there appeared to be minimal assistance for the bowlers on a partly cloudy morning.

Petersen looked solid from the start and struck six fours and a pulled six off Prasad as he moved to 54 not out. Petersen opened the batting ahead of Jacques Rudolph, who was due to bat at number six in place of the axed Ashwell Prince.

Jacques Kallis, who became the sixth player in the world to appear in 150 Test matches, also looked confident as he followed up his 'pair' in the second Test in Durban with an aggressive 47 not out off 37 balls as South Africa maintained a scoring rate of five runs an over.