Revellers mark turn of the year in style 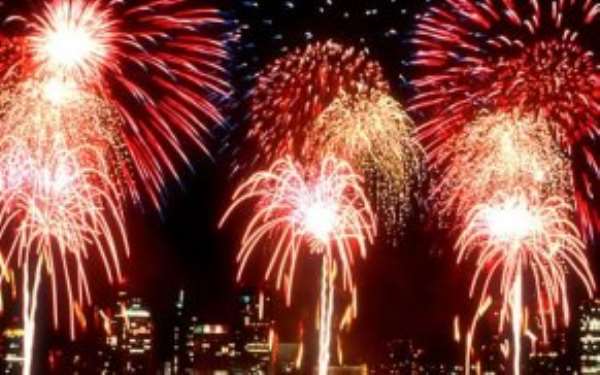 A multi-million dollar firework display heralded in the new year in Sydney, while the world's tallest building, the Burj Khalifa, was illuminated in Dubai.

Celebrations were held across Europe, with some 250,000 gathering to watch fireworks over the River Thames.

The traditional ball, lit this year with 30,000 lights, descended a high pole as the New Year began and Frank Sinatra's New York, New York was played.

In Ghana many gathered in churches to pray to usher in a violent free election year.

The 2012 elections was the focal point of many pastors as they cautioned politicians to be mindful of what they say and do as the country gears up for its parliamentary and presidential polls in December 2012.

'Full of smiles'
The first places to celebrate were Samoa and Tokelau after they jumped across the international dateline.

As the clock struck midnight at the end of 29 December, the two South Pacific island nations fast-forwarded to 31 December, missing out on 30 December entirely.

Tourists and locals partied throughout Saturday as Samoa revelled in being the first country to ring in the New Year, rather than the last.

In Tokyo, people released helium balloons in front of the Tokyo Tower at midnight with notes attached listing their hopes for 2012.

Many wished for a better year, following the earthquake and tsunami that brought devastation to the north-east of Japan in 2011.

'I hope it will be a year full of smiles. For those who are crying now, I hope they'll be smiling too,' said 21-year-old Horie Soichiro.

Days after the death of the North Korean leader, Kim Jong-il, the authorities issued a New Year message urging people to back his son and successor, Kim Jong-un.

'The whole party, the entire army and all the people should possess a firm conviction that they will become human bulwarks and human shields in defending Kim Jong-un unto death,' it said.

Risks and possibilities'
A downbeat tone was reflected in the new year's message of German Chancellor Angela Merkel, who said 2012 would be more difficult than 2011, but hoped Europe's debt crisis would bring its member states closer.

In a televised message marking the start of an election year in France, President Nicolas Sarkozy, issued a similar warning, but tried to remain upbeat.

'We have to be courageous and we have to be lucid. What is happening in the world announces that 2012 will be a year full of risks but also full of possibilities,' he said.

For his part, UN Secretary General Ban Ki-moon, who starts his second term on Sunday, said he hoped the new year would continue the move towards democracy that protesters had started during the so-called Arab Spring in 2011.

Meanwhile, thousands of people gathered in Red Square in Moscow to witness a firework display at midnight, although alcohol was banned to prevent the festivities getting out of hand.

Heavy rain dampened the celebrations in the Turkish city of Istanbul, but the main square in the Ukrainian capital Kiev was illuminated with an array of colourful lights and fireworks.

In the Spanish capital, Madrid, thousands of young people gathered at six indoor 'macro-parties' the authorities had organised in big venues across the city.

Revellers in the city centre greeted the new year by eating 12 grapes in time with the chimes at Madrid's central Puerta del Sol clock in a national tradition, while hundreds of thousands partied in Berlin to live music in the landmark Brandenburg Gate.

In Brazil, thousands enjoyed a fireworks display on the beaches of Rio de Janeiro.

Musical medley
Sydney's firework spectacular had the theme 'Time to Dream', which producer Aneurin Coffey said was about giving people a chance to put a bad year behind them.

An estimated million-strong crowd watched the pyrotechnics around Sydney Harbour Bridge, which were accompanied by a medley of wild animal sounds and pop music.

Some of the fireworks resembled waterfalls, rainbows and clouds - which Mr Coffey said was 'because every cloud has a silver lining'.